WCBI – TV was the first television station in North Mississippi. The station began its regular operations on July 13, 1956 under the ownership of Birney Imes, Jr. WCBI was first housed in a group of cement block buildings in a pasture east of Columbus on Highway 12.

Originally, WCBI-TV was affiliated with CBS and with NBC. At that time, stations could select programs from all networks. Shows including “The $64,000 Question”, “Jackie Gleason”, “Gunsmoke” and locally produced “Fun Time with Uncle Bunky” were seen on WCBI-TV. Today WCBI – TV is a CBS affiliate. 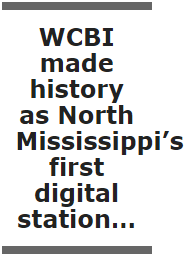 After more than three decades on Highway 12 WCBI came to town. In the early 1990s under Frank Imes’ and Imes Communication’s direction WCBI completely renovated the building that once housed Egger’s and Loeb’s Department Store transforming it into an elegant state-of-the-art facility.

The new building opened in 1993. The restored historic downtown building with its modern broadcast center represents a multimillion dollar investment and a commitment to providing the finest in news, weather, sports and entertainment. WCBI reaches viewers in Mississippi from Booneville to Philadelphia, west to Grenada, and east to Tuscaloosa County, AL from its downtown Columbus location. Its coverage area includes 721,000 people.

WCBI began broadcasting a full power digital signal in August of 2002. By early September, WCBI-DT was streaming three broadcast channels – WCBI-DT 35-1 (a high definition CBS broadcast); WCBI-DT 35-2 (a standard definition UPN signal); and WCBI-DT 35-3 (a 24 hour local weather station). All broadcasts, including analog channel 4, are generated from our 601 digital plant. WCBI is making history again as North Mississippi’s first digital station, and one of the few stations in the nation broadcasting multiple streams of news, sports, weather and entertainment.

The latest technological advances and a lasting commitment to the community are the ingredients that make WCBI – TV the station to turn to for news, weather, sports and entertainment in North Mississippi and Northwest Alabama.