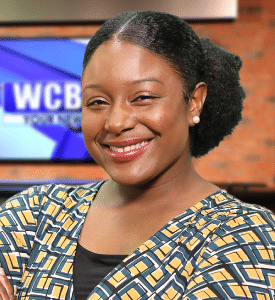 Stephanie Poole is a 2018 graduate of Mississippi State University #HAILSTATE ! She grew up in Gulfport, MS where she attended Gulfport High School.

Stephanie began her broadcast career as an reporter/ anchor on the student television show at MSU called “TAKE30”. Later, she worked for Cumulus Broadcasting Media as radio talent and remote assistant.

This is Stephanie’s first reporting job. She’s very humbled to have gotten this job so soon after graduating. She enjoys covering everything from breaking news to local feature stories. Everyone’s story should be told and she tries her best to capture the true essence.

When Stephanie isn’t reporting she enjoys blogging, trying new recipes, painting and being with family.

If you want to connect with Stephanie, make sure to follow her on Twitter or email her at spoole@wcbi.com.

Two people are in the hospital following a car wreck

Starkville residents mourn the loss of child killed in a shooting

Escaped Choctaw co. inmate has been captured in Arkansas

Columbus city leaders bury a time capsule, will open in 2072

Lowndes co. man taken to the hospital after motorcycle accident

The search is underway for burglary suspect Richard Rash

A Georgia man charged after pursuit that started in Louisville

Remains believed to belong to Felicia Cox are found

Two dead,one person in critical condition after a shooting in Brooksville

Two men are dead following an overnight shooting in Nettleton

Two men are dead following an overnight shooting in Nettleton