The eventual constellation also will be available for use by the Pentagon and commercial customers, including aircraft and ships at sea.

“Your strategy of mass assembly of complex digital components from an array of vendors on dual production lines is changing the economics of the satellite industry,” Commerce Secretary Wilbur Ross said before a ribbon-cutting ceremony. “Coupled with new private sector launch vehicles, you’re improving the prospects for billions of people to be connected to the internet.”

Said FCC Chairman Ajit Pai: “OneWeb is doing for the satellite industry what Henry Ford did for cars.”

“This technology holds special promise for bringing high-speed broadband service to those in rural and tribal and remote parts of the country, parts of the world, people who’ve never been connected before,” he said.

The 105,500-square-foot production facility is located across the street from Blue Origin’s sprawling rocket factory just outside NASA’s Florida spaceport. OneWeb and the European aerospace giant Airbus jointly own a third company, OneWeb Satellites, that will build the new spacecraft. The European consortium Arianespace will launch the initial constellation..

Six OneWeb satellites were launched atop a Soyuz rocket from French Guiana earlier this year to test throughput and latency in a pilot project connecting schools in Alaska, Ecuador, Honduras, Rwanda, Nepal and Kyrgyzstan. By the end of the year, another Soyuz is expected to carry the first load of 32 operational satellites to orbit.

“Building two satellites a day is a pretty hard thing to do. Trust me, it takes a lot of ingenuity and a lot of hard work,” said Tony Gingiss, chairman and CEO of OneWeb Satellites. “But we’re going to do it, we’re going to pioneer serial satellite production. … We are really revolutionizing the way we produce satellites.”

By placing multiple satellites in multiple orbital planes, users anywhere on Earth will be within line-of-sight and able to send and receive internet data. OneWeb plans to launch 650 satellites, most aboard Soyuz rockets, to provide an initial operating capability. But depending on demand, the company expects to expand the fleet to nearly 2,000 relay stations in the years ahead. 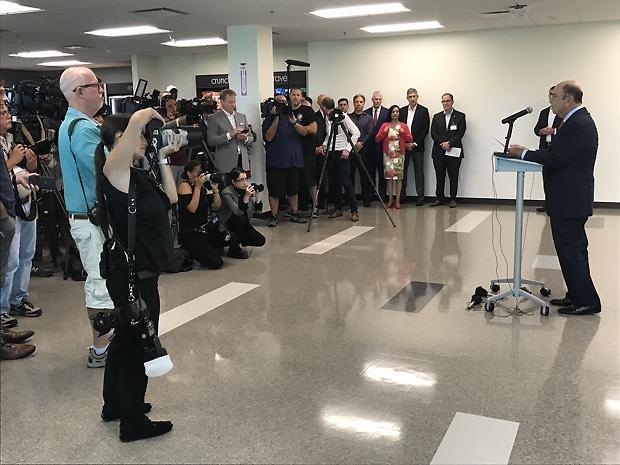 “OneWeb was started with a mission to bridge the digital divide, to help connect schools around the world,” said Greg Wyler, founder and chairman of OneWeb. “By 2022 … starting from the remote (ares) in, OneWeb will pick up all the schools that don’t get connected by something else. That’s the fundamental philosophy and vision of OneWeb.”

“We’re seeing 400 megabits per second (connectivity) with 30 millisecond latency,” he said. That’s equivalent to a cable modem in the U.S. So we’re now able to show and demonstrate working satellites that can connect these places around the world.”

But OneWeb will face stiff competition from constellations being fielded by SpaceX, Amazon and others. SpaceX launched 60 of its Starlink internet stations atop a Falcon 9 rocket in May.

However the market evolves, Florida officials said they were thrilled with OneWeb’s progress.

“The satellites built in this factory will be capable of delivering high-speed, low-latency services from an advanced and highly efficient platform that can eventually serve many additional markets well beyond the various OneWeb constellations in the future,” said Frank DiBello, CEO of Space Florida.

“We’re building a dream to connect mobile fleets no matter where they are, fixed-site users in every nation and eventually every school on the planet. The OneWeb satellite system will be truly transformative in raising the level of nations and their people across the globe, a goal that Greg Wyler and his founding partners have espoused from the beginning.”