Plans moving along for the Chickasaw Heritage Center

TUPELO, Miss. (WCBI) – Plans are moving along for a project that will help tell the story of the Chickasaw Nation.

For a wreath-laying ceremony at the Piominko statue at Fairkpark, there was Choctaw social dancing and hymns.

The ceremony provided a look into the traditions and customs of the Chickasaw Nation.  Their history and story will be highlighted at the ‘Chickasaw Heritage Center.,”  a 36 million dollar project that will be built next to the Chickasaw Village Site near the Natchez Trace Parkway.

It will feature a reconstructed village, an exhibit hall, theater, gift shop, cafe, and other attractions.

“From years there have been many efforts to interpret Chickasaw history and culture from non-native perspectives.  This heritage center gives an opportunity to tell the story of Chickasaw people from their own perspective,” said Brady Davis, CEO of the Chickasaw-Inkana Foundation.

The city of Tupelo will build an access road for crews to use when construction gets underway.  The heritage center is expected to be a major tourist attraction, generating around six million dollars every year.

“An educational center throughout the whole region, North Alabama, Tennessee, Arkansas, and Mississippi, and we can’t wait to get started,” said Tupelo Mayor Todd Jordan.

“The Governor came three years ago and made it clear his objective was not just to build a building, his objective is to encourage international tourists to come,” said Robert Perry, an Elder in the Chickasaw Nation.

Groundbreaking on the Chickasaw Heritage Center is set for the fall of 2022.  It will take about three years to build and fundraising is underway.

For more information about the heritage center, go to inkana.org 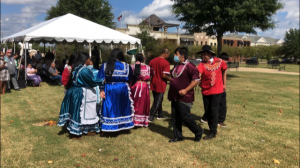 Rain and storms tonight, then much colder tomorrow