Another tornado outbreak is possible in the southern U.S. on Sunday

A week after one of the biggest tornado outbreaks in U.S. history, more tornadoes are likely again on Sunday. The bullseye will be over some of the same areas of the Deep South that were hard hit during last weekend’s Easter outbreak.

An enhanced risk corresponds to a 3 out of 5 on the severe weather scale. Last weekend registered a 4 out of 5. So while we are expecting possible strong tornadoes Sunday, the outbreak should not be as intense as the one we saw last weekend.

The best chance for severe thunderstorms will be centered around cities like Alexandria, Louisiana; Hattiesburg, Mississippi; Montgomery, Alabama; and Macon, Georgia. While damaging straight-line winds will be the most widespread threat, large hail and tornadoes are likely, and a few may be strong.

Like last weekend, some shelters in the South will be open, but residents must weigh the risk of exposure to COVID-19. The American Meteorological Society urges residents who live in less-than-secure structures to plan ahead and not hesitate to use shelters, but to adhere to social distancing guidelines and use of PPE.

This week’s weather event will begin on Saturday afternoon as storms fire up in the eastern half of Texas. That first round will move eastward through the Southeast Saturday night bringing scattered severe weather.

The main event will start early Sunday as another round of storms develops in East Texas and Louisiana. As temperatures warm during the day the coverage of storms will increase as the system moves east.

By afternoon, severe storms will be widespread and the threat for tornadoes will increase as the afternoon wears on in Mississippi, Alabama and Georgia.

The storms will move east towards the Southeastern Seaboard Sunday night and into early Monday morning before moving offshore.

Adding to the potency of the storms will be abnormally warm Gulf of Mexico waters. Sea surface temperatures are running about 4 degrees above normal, partially due to record warmth along the Gulf Coast this March.

The warm waters were a big contributor to this past Easter Sunday outbreak in which 131 tornadoes were confirmed. The Bassfield, Mississippi tornado registered winds of 190 mph and was 2.25 miles wide – the third largest ever in the nation.

Research shows that warmer Gulf of Mexico waters, partially due to human-caused climate change, lead to more severe weather and tornadoes in the Deep South during the spring.

As one might expect, with more available energy in the Deep South, a 2018 paper concluded that tornado alley is indeed spreading eastward. An increasing number of tornadoes are being found in Dixie Alley, while there has been a relative decrease in the traditional Plain States tornado alley.

There’s no scientific evidence that global warming leads to more tornadoes overall, but there is peer-reviewed research that shows tornado outbreaks are becoming more extreme. That’s because added heat and moisture from a warmer world are loading the environment with more energy on certain days which are conducive to severe storm development. 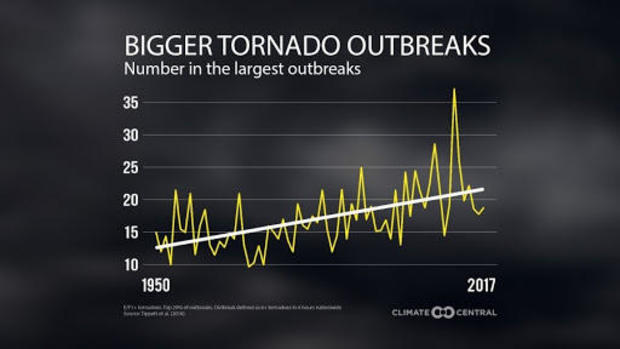 Climate change will continue to add extra fuel to the atmosphere for decades to come, helping to make already extreme events more extreme.