Book excerpt: Jim Acosta's “The Enemy of the People”

Candidate and then President Trump has repeatedly attacked the news media, calling stories he dislikes “fake news,” while targeting some of his attacks directly at CNN’s chief White House correspondent, Jim Acosta.

In his new book, “The Enemy of the People: A Dangerous Time to Tell the Truth in America” (HarperCollins), Acosta writes about his experience covering a very different kind of president than America has ever seen before – one who has called Acosta an “enemy of the people” for reporting news that does not show Mr. Trump in a positive light.

This was particularly true in the aftermath of the August 2017 “Unite the Right” rally by white supremacists in Charlottesville, Va. Marching through the city and chanting racial slurs, the neo-Nazis and Klan members faced off against counterprotesters. A white supremacist then intentionally drove a car directly into the crowd, killing one woman and injuring at least 26 others.

The president’s response was, in the eyes of many, deplorable, and he was confronted on it by Acosta.

Trump, who was on vacation in New Jersey during the unrest in Charlottesville, delivered a brief statement on the violence. The same president who had won the White House by employing racially loaded rhetoric, from spreading the “birther” lie about Barack Obama to slandering Mexican immigrants as “rapists,” was all of a sudden thrust into the position of calming a nation terrified by racist thugs on the march in Virginia. 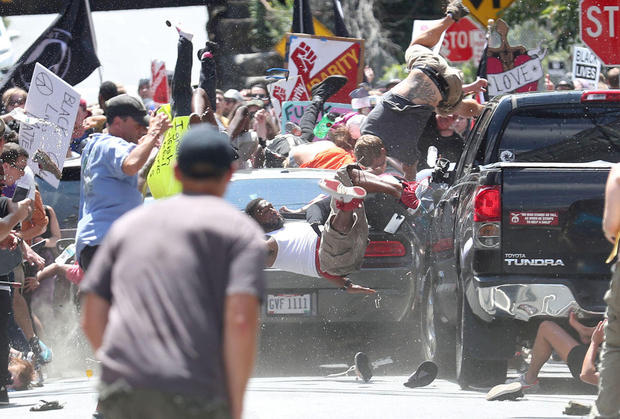 A car plows into a crowd in Charlottesville, Virginia, on Aug. 12, 2017. Ryan M. Kelly, The Daily Progress

There is really no other way to put it except to say that in the moments that followed, Trump failed to ease the public’s concerns. In his first remarks on the violence in Charlottesville, he appeared to blame both the white supremacists and the counterprotesters equally.

His “many sides” comment was not an accidental slip of the tongue. If you go back and watch the video, Trump pauses dramatically and repeats the words “many sides.” He wanted to make it clear that, as far as he was concerned, there was blame to go all around, never mind the fact that there were neo-Nazis and Klan members on one of those sides.

It was jarring to hear this kind of equivocation. Had Trump made this statement as a private citizen, I’m not sure many people would have cared. But it was surreal and disturbing coming from the mouth of the leader of the free world. No modern president from the post-World War II era had ever made such a statement. Trump wasn’t bringing calm to the situation, I thought. More than he had during the campaign, he was revealing who he was. There was no base to placate or excite in the hours of Charlottesville. This was a moment for leadership, not more pandering. …

Offered a chance to do cleanup, the White House instead doubled down on Trump’s comments. There was no going back. Trump had crossed a line and, in my view, permanently damaged his presidency. And he wasn’t done.

Two days later, on August 14, Trump tried again. Stung by the intense criticism he had received in response to his remarks immediately following the violence in Charlottesville, he addressed the nation. I was in the pool that day, as it was CNN’s day to represent the TV networks. The press gathered in the Diplomatic Room of the White House, where we awaited the president’s latest comments. The story, of course, was whether Trump would strongly condemn the white supremacists behind the melee in Charlottesville, as he should have done from the very beginning. Reading from prepared remarks, he did just that:

“Racism is evil. And those who cause violence in its name are criminals and thugs, including the KKK, neo-Nazis, white supremacists, and other hate groups that are repugnant to everything we hold dear as Americans,” he said to the nation. 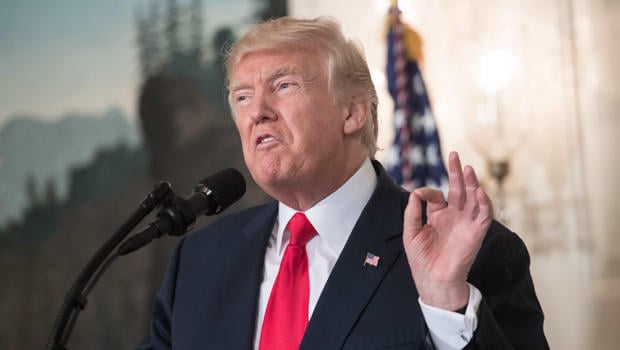 President Donald Trump makes a statement in the Diplomatic Room at the White House in Washington, D.C., on August 14, 2017. AFP/Getty Images

Later in the day, Trump held a separate event where he called for an investigation into Chinese trade practices. Still in the pool for that afternoon, I asked him about the contrast between his remarks from earlier in the day and his initial response to what had happened in Charlottesville over the weekend.

“Can you explain why you did not condemn those hate groups by name over the weekend?” I asked.

I then followed up and asked why he wasn’t holding a press conference on Monday, as he had promised that previously Friday, before the events in Charlottesville.

“We just had a press conference,” he answered.

“Could we ask you some more questions?” I inquired.

“It doesn’t bother me at all, but I like real news, not fake news,” he said, and then pointed at me. “You’re fake news.”

“Mr. President, haven’t you spread a lot of fake news yourself, sir?” I responded.

Ah, the old “fake news” line. It was back. I’ve learned that’s become one of his “tells.” Like a poker player, Trump has a tell, giving away what kind of hand he’s holding. If he’s screaming about “fake news,” he’s almost always losing. And he was losing on Charlottesville. Trump clearly didn’t like the fact that he had been compelled by his advisers to revise his botched response to Charlottesville. That was as bad, in his view, as admitting a mistake. And in Trumpworld, as I’ve been told time and again by his advisers, you don’t admit mistakes. You double down on everything, even the stuff you did wrong.   …

[The next day], I traveled up to New York with the hunch that Trump would not be able to help himself and would dive back into the Charlottesville issue. As we had so often during the campaign, we gathered in the gold-plated lobby of Trump Tower to await Trump. It felt like old times. (It should be noted that his aides told us in advance that he wouldn’t take any questions.) Trump came down the elevator, made some remarks about his hopes for an infrastructure bill, and before he could turn to exit the lobby, a question on Charlottesville was shouted his way by my NBC colleague Hallie Jackson, and we were off to the races.

It is still stunning to read the president’s remarks that day. As of this writing, remarkably, they remain on the official White House website. In them, Trump returned to blaming both sides for the violence in Charlottesville. And then I jumped in, mainly because I couldn’t believe what I was hearing.

As you may have noticed, I didn’t put my questions in question form. That wasn’t necessary in this case, and here’s why. I suppose I could have asked him, ‘Sir, isn’t it true that there aren’t any fine people in the Nazis?’  But that would have suggested that this notion was open to debate.  I’m sorry, but there aren’t two sides when it comes to Nazis.  I think we have reached the point where we can state definitively, that Nazis are bad people.  It kind of goes without saying.  But I will: If you are a Nazi, you aren’t a fine person.  You’re bad.  So yes, I felt well within the safe bounds of reporting to state back to the president ‘there are no fine people in the Nazis.’  When it’s a matter of right versus wrong, there are not two sides to the story.

Excerpted from THE ENEMY OF THE PEOPLE: A DANGEROUS TIME TO TELL THE TRUTH IN AMERICA by Jim Acosta. Copyright © 2019 by Abilio James Acosta. Published by HarperCollins.