Economic expertise and crisis management skills are top qualities Democratic voters want to see in a vice-presidential pick for their party — even more so than executive or legislative experience — as concerns about the pandemic and the economy now become a lens through which voters see that selection process.

Those criteria become even more important to Democrats who are very concerned about either their own job losses, or contracting the coronavirus themselves.

Elizabeth Warren is well atop Democratic voters’ list of those who should be considered for vice president — with 71% saying she should be — and Warren also outpaces other possible picks by a wide margin as their first choice for the job: Warren at 36% first choice, to Kamala Harris’ 19%, Stacey Abrams at 14%, and Amy Klobuchar at 13%. No one else gets over 4%. 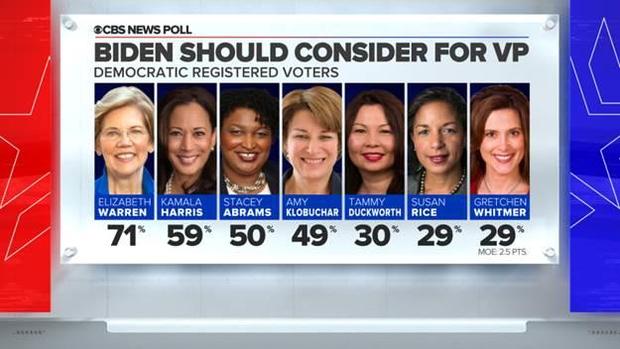 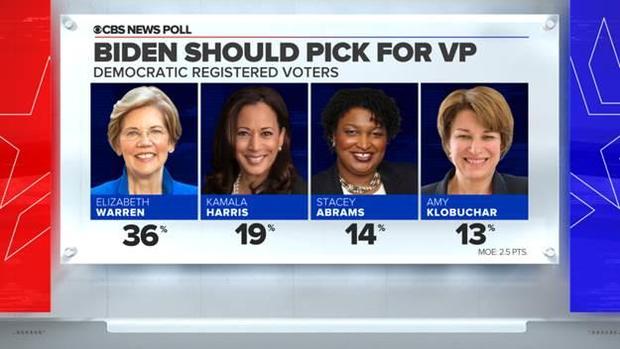 But familiarity is a big factor here, as three of the women who just ran for president are at or near the top of voters’ lists. More Democrats express an opinion about Warren, Harris, and Klobuchar than they do about any of the others. And they get far higher consideration numbers along with that; there’s a strong correlation between the two.

Aside from the former presidential candidates, Democrats are more aware of Stacey Abrams — whose 2018 gubernatorial campaign in Georgia drew national attention — than of Michigan Governor Gretchen Whitmer, who has been in the news lately during the virus outbreak. Whitmer and the other women tested remain unfamiliar to many Democrats: between half and three quarters said they haven’t yet heard enough about them yet to say if they should be on the consideration list. All the names tested here were those of women.

Warren does very well among those who say economic expertise is a key criteria. She is especially appealing to Democrats who say Biden should pick a liberal or progressive, but even among those who would prefer a moderate running mate, most put her on the list.

Harris elicits as much consideration from white Democrats as she does from black Democrats. She also does better among those who prioritize a pick who motivates Democratic turnout than she does overall. 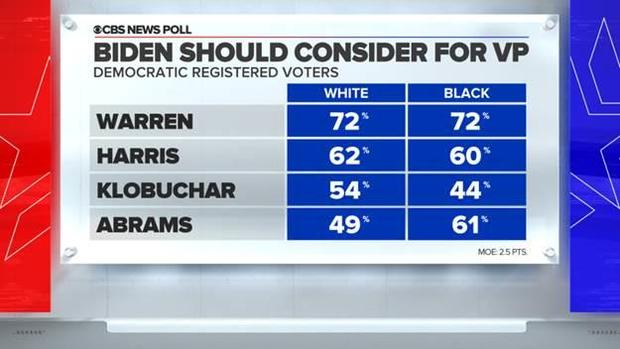 As in the presidential primaries, Democratic voters here can also play political consultant, trying to figure out what the larger electorate might want in a vice president, instead of just what they want themselves — and there’s a bit of tension in that. More Democrats want a liberal or progressive vice president than a moderate one, but Democrats also feel a moderate would boost the ticket’s chances of winning, more so than a liberal or progressive one. 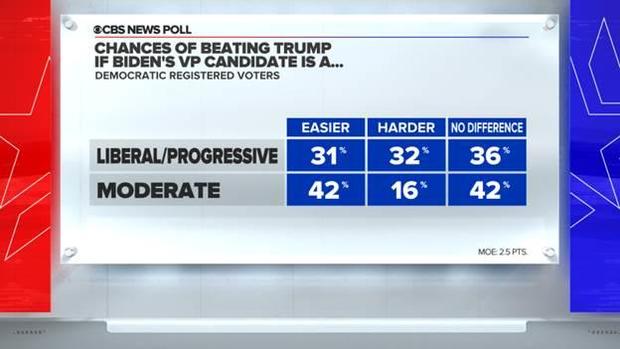 Priorities for a vice president offer another window into what voters think the campaign’s strategy ought to be: Democrats are more likely to prioritize a candidate who motivates traditional Democrats to turn out than one who could appeal to swing or Trump voters. 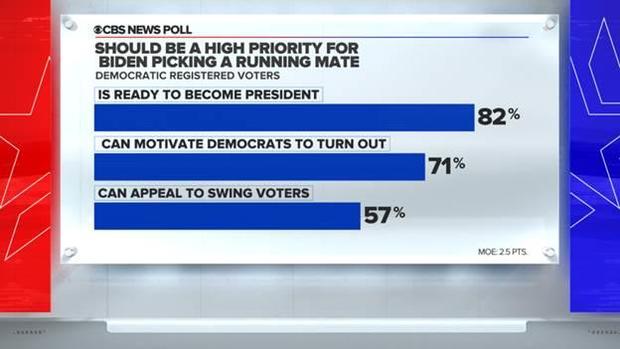 Above all, they prioritize picking someone ready to step in as president, if need be.

Based on CBS News reporting, the names respondents were asked about in the survey have been discussed within the Biden campaign as likely to be vetted or have been recommended to the campaign by other prominent Democrats. (See the full list at the bottom of this article.)

Biden has said he would select a woman, which aligns with what rank-and-file Democrats say they personally want: by 7 to 1, those with a preference prefer the pick be a woman to a man. This pattern holds for both Democratic men and women voters. Moreover, they think picking a woman is a winning formula: by about 2 to 1, more feel it will make things easier for the ticket to beat President Trump this fall. 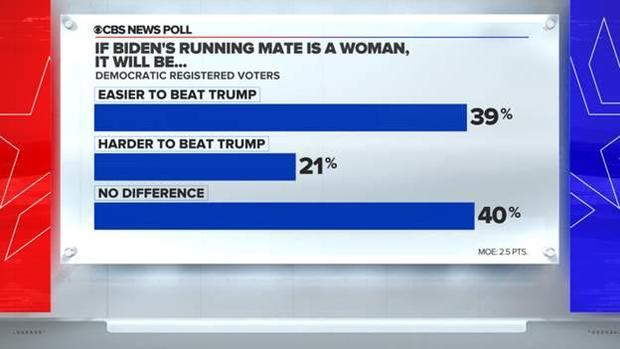 But it doesn’t matter to most Democratic voters whether the selection is someone white or someone of color: 74% say they’ve no preference on that. 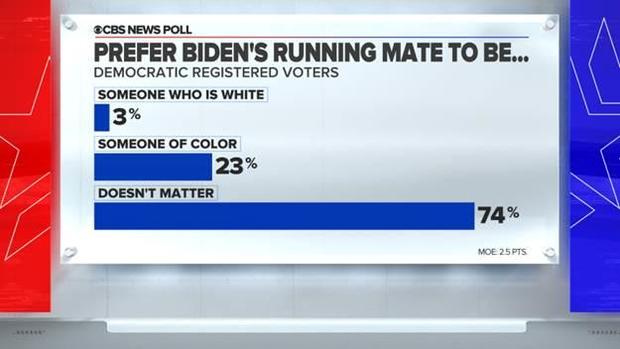 Voters also have more varied views, in the aggregate, of how the ticket might fare depending on the vice-presidential nominee’s race. White Democrats are a little more likely than black Democrats to think a black nominee would help the ticket’s chances. 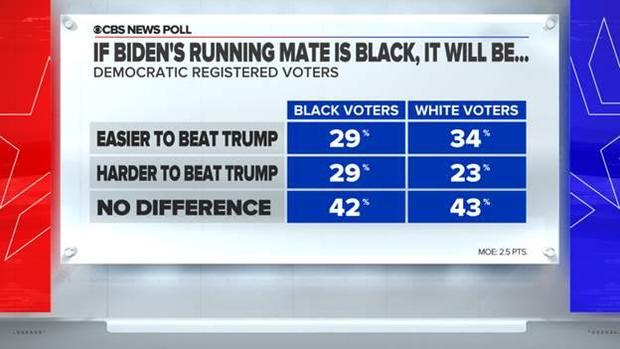 Former first lady Michelle Obama was not listed among the potential picks but was asked about in a stand-alone question. Most Democrats (64%) would like to see her on the ticket if she were in the running.

For all this, though, relatively few voters consider the vice presidential pick as very important to their vote — just a quarter do. On the other hand, of course, a close election means everything matters. 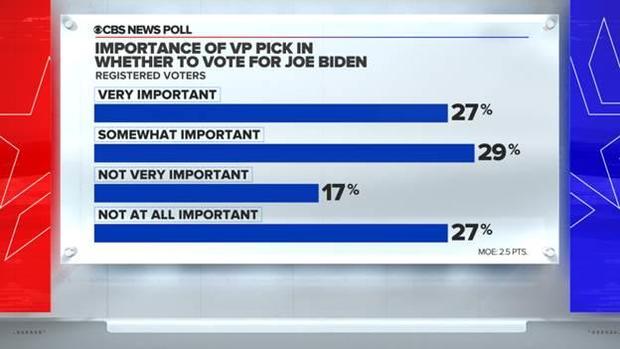 Nationwide, Biden is the preference of likely voters by six points over Mr. Trump. But a reminder: while this measure is offered as context and a sense of where voters are, the national vote tally doesn’t determine the presidency — the Electoral College does. 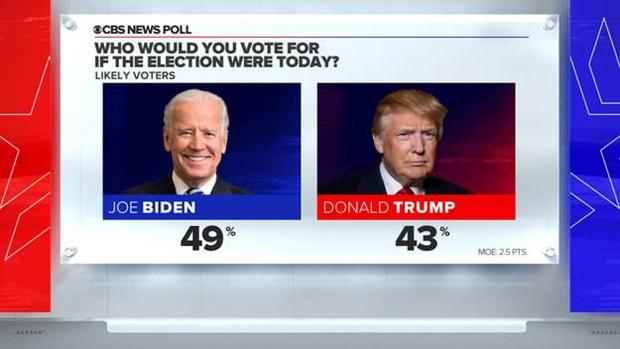 Voters say both the coronavirus outbreak and the economy are factors in their vote choice right now, especially the economy.

Even though Republicans in our recent polling have consistently praised the president’s handling of the outbreak, relatively few of Mr. Trump’s current supporters cite the coronavirus in general as a major factor in their presidential vote — just 19% do — and twice as many of Biden’s backers say it is a factor. Mr. Trump’s voters point instead to the economy, even more so than Biden’s do. 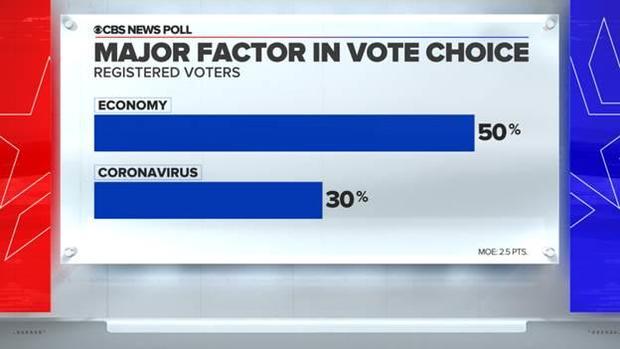 Throughout the last two months, Democrats have expressed relatively more concern about the outbreak, and here Biden has a wide vote-choice advantage among those who say the outbreak is a major factor.

This CBS News survey was conducted by YouGov using a nationally representative sample of 2,200 U.S. residents interviewed between April 28 – May 1, 2020. This sample was weighted according to gender, age, race and education based on the American Community Survey, conducted by the U.S. Bureau of the Census, as well as 2016 presidential vote and registration status. The margin of error is +/- 2.5 points.