While Joe Biden continues to lead all Democratic candidates across early states in the presidential nominating process, his previously large advantage has shrunk since June, according to the latest estimates from the CBS News Battleground Tracker poll and delegate model.

While poll percentages in each state often attract attention, the race for the Democratic presidential nomination is ultimately a fight for delegates at the party’s national convention next July. The party is set to seat 3,768 delegates at the convention in Milwaukee, and a candidate needs to win at least 1,885 delegates to win the nomination.

We estimate that Biden currently has 581 delegates in the nominating contests through Super Tuesday, which is considerably fewer than his estimate last month. This is based on our model, which translates voter preferences into district- and state-level estimates, taking into account Democratic party allocation rules. Delegates are given out proportionally to top finishers in each district and statewide.

Meanwhile, Elizabeth Warren’s estimate has improved to 430 delegates, significantly reducing the gap between her and Biden. She does particularly well with college graduates, politically engaged voters and very liberal Democrats.

Bernie Sanders is currently in third place with 249 delegates. His estimate has dropped since last month. While he’s kept most of his supporters, he hasn’t done quite as well at retaining them, particularly college-educated Democrats: one in 10 of his supporters from June now say Warren is their top choice.

Kamala Harris is currently in fourth with 173 delegates. Although her vote share across these states is one point higher than Sanders’ share, delegates are what counts, and Sanders is picking them up in more places, including Iowa, New Hampshire and South Carolina.

A couple of candidates are benefiting from early contests in their home states, without seeing delegate gains elsewhere. Beto O’Rourke is now at 48 delegates, entirely thanks to his supporters in Texas. Similarly, Amy Klobuchar is picking up 13 delegates entirely in her home state of Minnesota.

Our estimates apply to the 18 contests scheduled on or before Super Tuesday, from the Iowa caucuses to California, Texas and the smorgasbord of other state primaries on that eventful Tuesday in March. Together, these contests account for an estimated 1,494 delegates, or 40% of all pledged delegates to the Democratic convention next summer. (Since our last estimates, Georgia has rescheduled its primary to later in March, while Maine has joined the Super Tuesday states, accounting for a slight change in the total delegates available and the list of states included here.)

The Democratic nomination is won and lost on delegates, and a candidate doesn’t have to come in first place to earn delegates. For these reasons, we are estimating how candidates are doing in terms of delegates across the early states (in addition to reporting their vote shares).

While a quarter of Democratic likely voters in these states name Biden as their top choice, he would win nearly 40% of the delegates at stake if people voted today. Similarly, Warren is estimated to be winning 29% of delegates with 20% of the vote. Vote percentage does not translate directly to delegates, in part due to the particulars of the Democratic nominating process: candidates must win at least 15% of votes in a state or district in order to be awarded delegates there. Many of the other candidates in the large Democratic field are estimated to be short of the 15% eligibility threshold, and the delegates are allocated only among the few candidates with large enough vote shares to qualify.

Biden’s current supporters, as well as those who are considering him, tend to be older and less likely to hold college degrees than other Democratic voters. He continues to poll particularly well among black voters, two-thirds of whom are at least considering him, with four in 10 saying he is their first choice. Most of Biden’s estimated delegates are currently coming from Southern states.

Warren and Harris are particularly popular among voters with college degrees. Two-thirds of them are considering Warren, six in 10 are considering Harris, and nearly half are considering both of them. Among college graduates, a 27% plurality say Warren is their top choice. Her supporters are also more likely to be white than other early-state Democratic likely voters.

Voters’ candidate preferences also differ by their current level of political engagement and ideology. Those who say they’re paying a lot of attention to the 2020 candidates tend to prefer Warren and Biden. Biden is currently the top choice among voters paying some or a little attention, followed by Sanders. Biden is also doing relatively better among those who identify as somewhat liberal (as opposed to very liberal) and especially well among moderate Democrats.

People on social media have somewhat different preferences than those who are not. Voters who say they’re following the 2020 campaign on platforms such as Facebook and Twitter are about evenly divided between Biden and Warren; among those following on Twitter specifically, Warren is slightly ahead. Those who aren’t following on social media are more likely to support Biden.

Voters’ preferences are hardly set in stone this early in the primary season. Eight in ten voters tell us they are considering multiple candidates, and on average, voters are considering four.

We recontacted many of the voters we reached in last month’s Battleground Tracker poll, allowing us to look at whose first choice changed over the past few weeks. Overall, 36% of these voters changed their minds about which candidate they would support, indicating a fluid race. The top-tier candidates are doing relatively better at keeping their supporters from last month. In particular, Warren is retaining nearly eight in ten of voters who named her as their top choice in June. By contrast, the other three top-tier candidates — Biden, Harris, and Sanders — are closer to seven in 10.

Another informative way to analyze the data is to look at how many of each candidate’s current supporters are new. It’s 54% for Harris, who has the highest share of new supporters. Most came to her side from Biden, and one in five came from Warren. Among Warren’s current supporters, 36% are new. They are more evenly distributed among the other leading candidates: 24% came from Biden, 20% came from Sanders, and 18% came from Harris. Among Biden and Sanders supporters, closer to one in five are new, reflecting their current difficulties converting voters to their side.

California, the state with the most delegates at stake, features one of the closest races we have estimated. Biden is currently in the lead with 127 delegates, but Warren and Harris are closing in, with 103 and 101 delegates, respectively. Sanders is currently in fourth place in the Golden State with 85 delegates.

In the map below, each district is shaded by the delegate leader there, though other candidates may also be estimated to be getting delegates in the district. 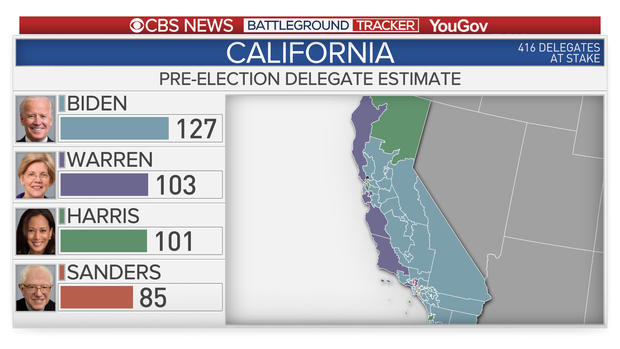 While each of these candidates is estimated to pick up delegates across a range of districts, certain types of candidates do better in certain types of districts. Biden does well in districts home to lots of black Democrats, including around Los Angeles. Warren is doing well in diverse and affluent congressional districts along the coast. Harris’ support in the state is less differentiated by demographics. She does pick up delegates in many places across the state, but is not the delegate leader in many individual districts.

In Texas, another large primary with a sizable share of delegates, Biden has a more commanding lead at the moment. He stands at 92 delegates, with Warren and O’Rourke trailing him with 67 delegates and 48 delegates, respectively.

As in California, Biden tends to do better in districts with many black and/or Hispanic Democrats. (Texas allocates delegates by state senate districts, rather than U.S. congressional districts.) Warren and O’Rourke post strong statewide numbers and are picking up delegates in a variety of districts, particularly in those with lots of college graduates.

Sanders and Harris are estimated to meet the threshold in a much smaller number of districts, earning them few delegates statewide. Again, in the map, we see that Biden is the delegate leader in most districts, with Warren leading in a few others. While not shown on the map, O’Rourke is picking up delegates across the state without leading in any individual district. 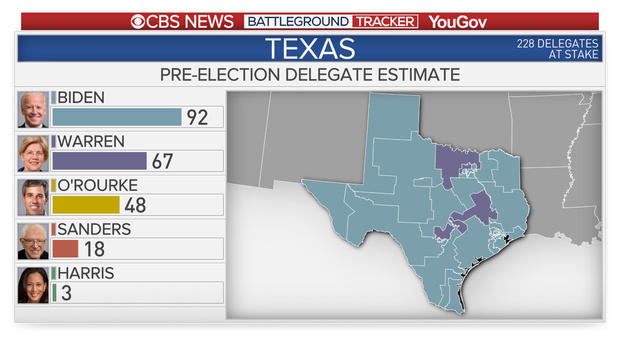 How the model works

In partnership with YouGov, CBS News surveyed voters across the 18 early states. We asked voters which of the 25 candidates in the running they are considering, and then which one they would vote for if their state’s primary or caucus were today. We applied a statistical model to estimate their support in each district and to translate their support into delegates.

The model is not a forecast: It is offered as a way of demonstrating how candidate support translates into delegate allocations based on state and party rules, because the nomination contest is ultimately a contest for delegates to the convention. Delegates are awarded at the state level (“at-large” delegates) and also by district, which the model takes into account. There is no forward looking uncertainty for political events or changes in the campaign built into the model. It is a snapshot of where the race stands today.