Harvey Weinstein breaks courtroom silence as he is sentenced

Harvey Weinstein pleaded for mercy and attempted to explain himself before he was sentenced Wednesday to 23 years in prison, breaking the silence he maintained in the Manhattan courtroom throughout his trial. After two of his accusers confronted him again, arguing his punishment in the landmark #MeToo rape case was long overdue, the 67-year-old former Hollywood mogul had a chance to make his statement to the judge.

Weinstein said he felt “remorse for this situation.” But he also argued that men are being accused of “things that none of us understood.”

“Thousands of men are losing due process. I’m worried about this country,” Weinstein said in a calm but creaking voice. “I’m totally confused. I think men are confused about these issues.”

Harvey Weinstein, center, flanked by his defense attorneys, listens during his sentencing in a Manhattan courtroom, Wednesday, March 11, 2020. Courtroom sketch by Elizabeth Williams via AP

Weinstein, who has been accused of violating scores of women, was convicted last month of raping aspiring actress Jessica Mann in a New York City hotel room in 2013 and forcing oral sex on former TV and film production assistant Mimi Haley at his apartment in 2006. He arrived in court in a wheelchair Wednesday morning, facing a possible maximum of 29 years in prison.

Weinstein gave a rambling speech that touched on his past charitable fundraising and his filmmaking career, and he said he had “no great powers in this industry.”

“I wasn’t about power, I was about making great movies,” he said.

Weinstein said his “empathy has grown” since his downfall, and said that his new “mission is to help people.”

Weinstein has maintained any sexual activity was consensual. He said he had thought he had good friendships with Haley and Mann, who exchanged friendly emails with him after the attacks — correspondence his defense frequently referenced during the trial.

“I had wonderful times with these people,” he said.

His conviction late last month was the first criminal fallout from a slew of allegations that the Oscar-winning movie producer used his clout to lure women, sexually assault or harass them and then silence them. He is also expected to face criminal charges in Los Angeles.

Prosecutors portrayed Weinstein as a manipulative predator as they asked a judge to impose a harsh sentence. They cited a series of allegations spanning decades from women who said Weinstein assaulted them, describing what they called “a lifetime of abuse toward others, sexual and otherwise.” At Weinstein’s trial, too, prosecutors sought to prove Weinstein had a pattern of assaulting women by calling accusers whose claims could not be prosecuted under state statutes of limitations.

All six women who testified were in the courtroom gallery Wednesday. Some cried after the sentence was handed down.

Both of the women Weinstein was convicted of assaulting spoke in court prior to his sentencing about the impact he had on their lives, and the empowerment they felt during the trial when they testified against him.

Haley said Weinstein has shown an “indifference, a lack of acknowledgement, a lack of awareness and self-awareness” that has left her “concerned he is completely disconnected from the gravity of the crime that he committed against me and the impact it’s had.”

She asked Judge James Burke to impose “whatever sentence is long enough for Harvey Weinstein to acknowledge what he’s done to me and to others and to be truly sorry.”

Haley said the assault had a devastating impact on her life.

“I believe that if Harvey Weinstein was not convicted by this jury, it would happen again and again and again,” Haley said as she broke down in tears, saying the 2006 attack scarred her deeply, made her rethink her career in the entertainment business and left her feeling paranoid and afraid of retaliation.

“I believe that when he attacked me that evening, with physical force, with no regard for anything I said, no regard for my cries and protests, my physical resistance, my panic and fear — it scarred me deeply — mentally and emotionally — perhaps irreparably, perhaps forever,” Haley said.

Haley described how she felt “trapped” and unable to go to authorities.

“At the time all of this happened I thought I was alone in this, I had no idea there were others, I didn’t realize the extent of Harvey Weinstein’s manipulative and calculated predatory behavior,” Haley said.

In an interview with “CBS This Morning” after the trial last month, Haley said hearing the guilty verdict was “a huge relief.”

“I felt just very grateful that they — that I’d been heard and believed,” she said.

“Rape is not just one moment of penetration. It is forever,” said Mann, who recalled a moment during the trial when she left the witness stand in tears and then could be heard screaming from an adjacent room. 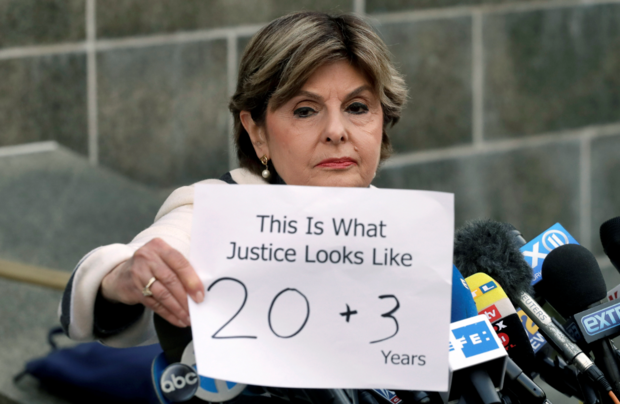 Time’s Up, an organization created to fight sexual harassment in the wake of #MeToo, on Wednesday hailed the women who testified against Weinstein for “the impact that they have had on our culture at large.”

Attorney Gloria Allred, who represents some of Weinstein’s victims, said she felt the sentence was fair and appropriate, but “whether he will ever be truly sorry, I don’t know.”

Weinstein lawyer Donna Rotunno bristled at his sentence, saying the judge and jury had “caved” in a #MeToo and media atmosphere where Weinstein “really never had a fair shake from day one.”

“We were looking for fairness, and we didn’t get it,” Rotunno said.

The Los Angeles County District Attorney’s office announced Wednesday it has begun the process of extraditing Weinstein to Los Angeles to face sexual assault charges filed there in January. The timing of that case remains unclear.

— Reporting by The Associated Press and CBS News’ Cassandra Gauthier