“This is an incredible vehicle,” he told a throng of space reporters, current and former NASA managers, engineers and astronauts. “And it’s going to the moon.”

Secretly under development for the past three years, Bezos said the “Blue Moon” lander, using a powerful new hydrogen-powered engine generating up to 10,000 pounds of thrust, will be capable of landing up to 6.5 metric tons of equipment on the lunar surface.

Equipped with gigabit-bandwidth optical communications gear, star trackers enabling autonomous navigation and terrain-mapping LIDAR systems, he said Blue Moon can safely touch down within 75 feet of a given target on slopes up to 15 degrees. Electrical power will be provided by fuel cells instead of solar panels, allowing the spacecraft to operate throughout cold, two-week-long lunar nights.

Payloads will be carried on the lander’s upper deck and lowered to the surface by davits much like lifeboats from an ocean liner. Bezos said the Blue Moon could be equipped with larger propellant tanks and other systems, allowing it to carry astronauts to the lunar surfaces in an ascent vehicle mounted on the lander’s upper deck. He did not discuss whether Blue Origin might also build such an ascent spacecraft.

The timing of Bezos announcement came as NASA works through the final stages of hammering out details and cost estimates to enable astronaut “boots on the moon” by 2024, a goal laid out by Vice President Mike Pence during a March 27 speech at the Marshall Space Flight Center.

In an interview with CBS News earlier Thursday, NASA Administrator Jim Bridenstine said one of the most difficult hurdles for meeting the 2024 challenge is development of a lander.

“The most significant piece is gonna be the landing capability,” he said. “Lunar landers are difficult to build. They take time, they take money. And we don’t have that capability. We did in the 1960s. There’s not another country on the planet that has anything near the capability to land on the surface of the moon. And we’re gonna start right away building that capability. That will be unique, and impressive and enable our astronauts to get to the surface of the moon.” 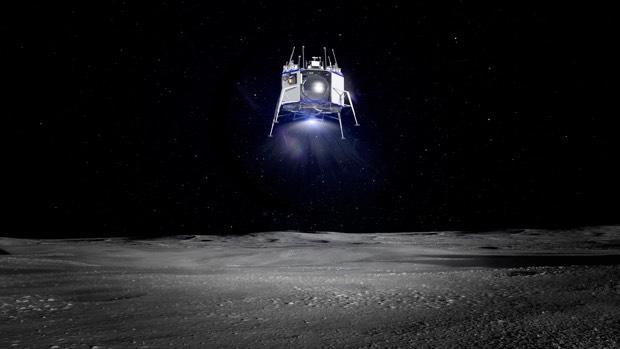 An artist’s impression of the Blue Moon lander descending toward touchdown on the lunar surface. Blue Origin

During a recent appearance before the House Subcommittee on Space and Aeronautics, Bill Gerstenmaier, NASA’s director of spaceflight operations, said the agency planned to use private industry as much as possible to help supply critical components, including major lander systems.

“A sustainable exploration plan requires that we build using realistically available resources,” he said. “We are designing an open, durable, reusable and cost-effective architecture that will support exploration for decades to come. Phase Two of our plan – achieving sustainability on the Moon – also requires partnerships from across the commercial sector and around the world.”

NASA’s lunar architecture calls for development of a small space station known as Gateway, assembled in orbit near the moon, that would serve as a staging base for payloads bound for robotic landings and, by 2024, astronaut visits using a descent stage and landing platform with a separate ascent vehicle to carry crews back to the Gateway.

Gateway components would be launched by yet-to-be-specified commercial rockets. Astronauts would fly to the moon aboard Lockheed-Martin Orion capsules perched atop the agency’s Space Launch System mega rocket. Crews would dock with the Gateway station and then board a lander for the trip to the moon’s surface.

Gerstenmaier earlier said NASA originally envisioned awarding separate contracts to build the lander components. But agency planners later decided it might make more sense to purchase all-in-one service from a single contractor, giving that “entity” responsibility for figuring out what capabilities would be needed in each phase of flight.

“We see the urgency, that we’ve got to get these pieces into place,” he said. “We saw the fact that originally we were going to do these as separate entities and then have NASA integrate them and put them together. We thought that might be slower, and if we gave accountability for all that to one entity that they could make those trades.

“So rather than us get in the middle of all those trades, we would go ahead and let industry trade those where we can kind of step back and review and watch what’s going on.” 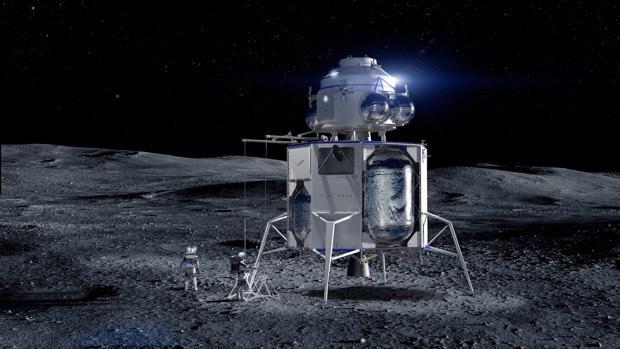 A larger version of the Blue Moon lander could carry astronauts to the surface aboard a pressurized module mounted on the lander’s upper deck. That vehicle, equipped with its own engines, then could boost a crew back to lunar orbit. Blue Origin

While there was no immediate response from NASA to the Blue Moon announcement, the lander would appear to be just what the doctor ordered given the tight five-year boots-on-the-moon objective. Assuming, of course, it could meet NASA’s safety requirements, budget constraints and a host of other requirements.

“I love this,” Bezos said of the agency’s accelerated plan to return to the moon. “It’s the right thing to do, and for those of you doing the arithmetic at home, that’s 2024, and we can help meet that timeline, but only because we started three years ago. It’s time to go back to the moon, this time to stay.”

NASA is expected to announce details of a revised moon plan in the next few days, including estimates of what additional money the agency will need to turn the Trump administration’s space mandate into reality.

Even without its lunar lander, Blue Origin has a full plate. The company is perfecting its New Shepard sub-orbital rocket, using a single BE-3 engine to propel a capsule out of the discernible atmosphere on brief forays to the edge of space. The company has launched 11 test flights and Bezos said the first passengers will be launched from Blue Origin’s west Texas flight facility later this year.

Just outside the Kennedy Space Center in Florida, Blue Origin has completed a huge factory to build New Glenn rockets and is building a launch complex at the nearby Cape Canaveral Air Force Station. Bezos said the first New Glenn rocket will fly in 2021.

The New Glenn first stage, capable of flying up to 25 times, would land on a ship at sea like SpaceX’s Falcon 9 boosters. But the Blue Origin system will use a recovery ship that can be repositioned on short notice to avoid bad weather at sea and improve the odds of launching.

While Bezos did not address how the Blue Moon lander would reach the moon, the spacecraft presumably could be launched atop a New Glenn rocket or NASA’s Space Launch System booster.