Jefferson City, Missouri—A Missouri judge on Monday ruled that the state’s lone abortion clinic can continue performing abortions through Friday but kicked the clinic’s lawsuit out of court. St. Louis Circuit Judge Michael Stelzer extended a preliminary injunction he previously issued in order to give a Planned Parenthood affiliate in St. Louis time to take a licensing fight before an administrative panel.

Stelzer ruled the clinic has not yet exhausted its options outside of court to handle the dispute over its license to perform abortions. The state health department on Friday declined to renew the clinic’s abortion license.

CBS News’ Kate Smith has reported on how Judge Stelzer granted Planned Parenthood an initial preliminary injunction, allowing the clinic to continue operating even as the Missouri’s health department has refused to renew its license. If the health center had closed, Missouri would have been the first state to not have an abortion clinic since Roe v. Wade was decided in 1973.

The judge directed Planned Parenthood to take the issue up with the Administrative Hearing Commission, a panel that typically handles disputes between state agencies and businesses or individuals. Requests for comment Monday to Planned Parenthood were not immediately returned.

The state has said concerns about the clinic arose from inspections in March. Among the problems Missouri Department of Health and Senior Services investigators have cited were three “failed abortions” requiring additional surgeries and another that led to life-threatening complications for the mother, The Associated Press reported last week, citing a now-sealed court filing.

Planned Parenthood has said Missouri is using the licensing process as a weapon aimed at halting abortions. CBS News reported earlier that Planned Parenthood of St. Louis sued the state in late May when the health department threatened to let the clinic’s license lapse unless it could interview five residents that had previously worked at the health center. At the time, the department had not given the clinic any indication what the investigation was regarding, said Dr. Colleen McNicholas, a Planned Parenthood physician in St. Louis. 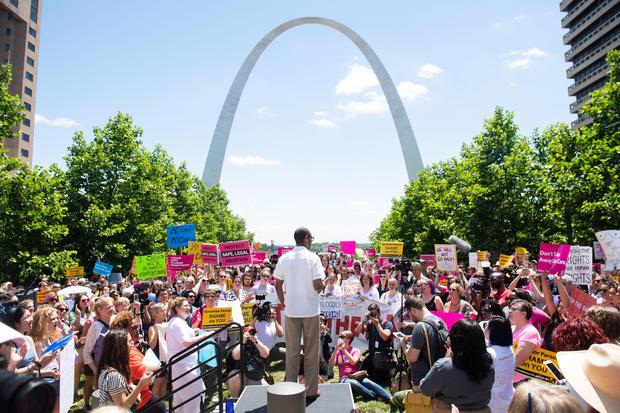 In June 2019 a Missouri judge sided with Planned Parenthood and ruled to allow the healthcare facility to operate without a state’s license.  Saul Loeb / AFP/Getty Images

Missouri is among several conservative states, emboldened by new conservative justices on the Supreme Court, to pass new restrictions on abortions in the hope that the high court will eventually overturn Roe v. Wade. Republican Gov. Mike Parson signed legislation on May 24 to ban abortions at or beyond eight weeks of pregnancy, with exceptions for medical emergencies but not for rape or incest.

The number of abortions performed in Missouri has declined every year for the past decade, reaching a low of 2,910 last year. Of those, an estimated 1,210 occurred at eight weeks or less of pregnancy, according to health department data. More Missouri women are getting abortions in Kansas than in Missouri. Information from the state of Kansas shows that about 3,300 of the 7,000 abortions performed there last year involved Missouri residents.

Kansas has an abortion clinic in Overland Park, a Kansas City suburb just 2 miles from the state line. The nearest clinic to St. Louis is in Granite City, Illinois, less than 10 miles away. Illinois does not track the home states of women seeking abortions so it’s unknown how many Missouri residents have been treated there.