The parents group says the board is unresponsive to their concerns, while the school district superintendent says all concerns are taken seriously 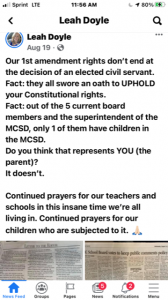 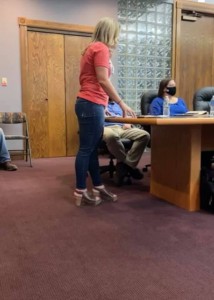 MONROE COUNTY, Miss. (WCBI) – A group of parents in Monroe County is upset with the school board over what parents say is the board’s reluctance to hear from the public on various issues.

The district’s superintendent says there are procedures in place that people must follow to keep things orderly.

It was at a meeting of the Monroe County School Board in July when Leah Doyle, a parent with two children in the district, tried to ask board members a question about a proposal to change the time of an upcoming board meeting.

The board adjourned , and Doyle continued to ask board members about the issue.  District One Board Butch Palmer , who was joining the meeting from a remote location, asked that Doyle be removed from the room by police.  That didn’t happen, but Doyle did make social media posts about the incident that were widely circulated.

“The president on the September meeting stated how sad it was parents did not attend the meetings. My question is this, to their policy, what purpose do we have in attending your meeting? You don’t allow public comment, we have to request to address you, if we address you after adjournment, our livelihood and jobs are threatened, so it makes clear sense to me now why parents don’t attend board meetings, because they are threatened,” Doyle said.

Superintendent Brian Jernigan wasn’t available for an on camera interview, but said there are procedures in place for the public to address the board.

“The thing that is pretty standard across the state is, the school board, that’s their meeting.  It is opened to the public, but not  opened to public participation.  That’s their meeting and if someone wants to have a comment or actually appear before the board with a formal issue, we can get them before the board, they just have to let me know and we make it happen,” Jernigan said.

Doyle has filed an ethics complaint against School Board member Butch Palmer, alleging Palmer called her employer, trying to have her fired.

During an exchange between Palmer and Doyle at a school board meeting, and during a phone call with us, Palmer admitted calling Doyle’s employer.  But he says he wasn’t trying to have her fired, he just wanted her employer to know about the social media posts she had been making.

“When you take a civil servant’s oath of office, you uphold the United States Constitution, that’s what you swear to do, if we all get upset at whomever is holding a political office, or any politician and we say something they don’t like, they don’t have the legal authority to call and try to slap you on the wrist,” Doyle said.

Superintendent Jernigan said he understands the parents’ concerns and says it’s impossible to make everyone happy, especially when it comes to the safe return plan.

The school board’s next meeting is set for October 12th .

Board member Butch Palmer said he hasn’t yet received a formal notice of the ethics complaint filed against him.