Despite appearances and a presidential tweet suggesting otherwise, the United States is “100%” committed to sending astronauts back to the moon in 2024 and establishing a long-term, sustainable presence there as a stepping stone to eventual piloted flights to Mars, Vice President Mike Pence said in an interview for CBS News’ “The Takeout.”

He also said the administration strongly supports continued development of the Space Launch System (SLS) heavy-lift booster, built by Boeing and managed at NASA’s Marshall Space Flight Center in Huntsville, Alabama, and the Lockheed Martin-built Orion crew capsule that will carry astronauts to the moon.

NASA hopes to launch the first unpiloted test flight of an SLS rocket and an Orion capsule in 2021, years later than originally planned. While Pence said the Trump administration remains committed to the huge rocket’s development, he warned the government will turn to other providers if NASA’s “traditional” contractors cannot deliver.

With a recently completed Orion spacecraft as a backdrop, Vice President Mike Pence, left, discusses the Trump administration’s goal of landing astronauts on the moon by 2024 with CBS News chief Washington correspondent Major Garrett during a visit to the Kennedy Space Center. Miles Doran/CBS News

The SLS “is behind schedule, and it’s over budget,” Pence said in an interview Saturday with CBS News chief Washington correspondent Major Garrett. “But the truth is that since the start of the Space Launch System program, many administrations have underfunded it, have (not given) it the attention that it deserves.

“This administration will not make that mistake. We’re committed to the work being done in Huntsville with the Space Launch System.”

He singled out SpaceX, the California rocket company founded by Elon Musk, and Blue Origin, a company owned by Amazon founder Jeff Bezos.

Blue Origin is testing a sub-orbital spacecraft that can carry researchers, science instruments and space tourists on brief flights to the lower fringes of space and is designing more powerful heavy lift rockets that will be built at a sprawling manufacturing facility just outside the Kennedy Space Center.

SpaceX already launches supplies to the International Space Station — its 18th resupply flight is scheduled for takeoff Wednesday — and is developing a piloted Crew Dragon spacecraft to carry astronauts to and from the lab complex. SpaceX also launches Falcon Heavy boosters and is developing an even more powerful rocket called “Starship.”

In a recent interview with TIME Magazine’s Jeff Kluger on “CBS Sunday Morning,” Musk claimed SpaceX could reach the moon in just two years with an unpiloted mission and “maybe within a year or two of that we could be sending crew. I would say four years at the outside.”

SpaceX CEO Elon Musk on the next giant leap for mankind

In the meantime, despite speculation to the contrary, the vice president said the Trump administration is firmly committed to sending astronauts back to the moon within five years as part of NASA’s newly named Artemis program.

“That’s 100% correct,” Pence told Garrett, sitting a few feet away from a recently completed Orion capsule at the Kennedy Space Center. “We understand, when we go to Mars — and Americans are going to Mars — that we’re going to have to have developed new technologies, new equipment and gain new experience that we can only gain on the moon.

“And the president fully endorses that. It’s one of the reasons why we set the goal that we’re going to return American astronauts to the moon in the next five years and then go on to Mars.”

Asked if astronauts might walk on the red planet in his lifetime, Pence said “most certainly.”

“I don’t think there’s any question whatsoever that we’ll be at Mars well within our lifetime. But it all begins with the stepping stone of getting back to the moon, developing the new technologies and developing the new methods for long-term human presence on another planet.”

But the moon is the near-term goal. 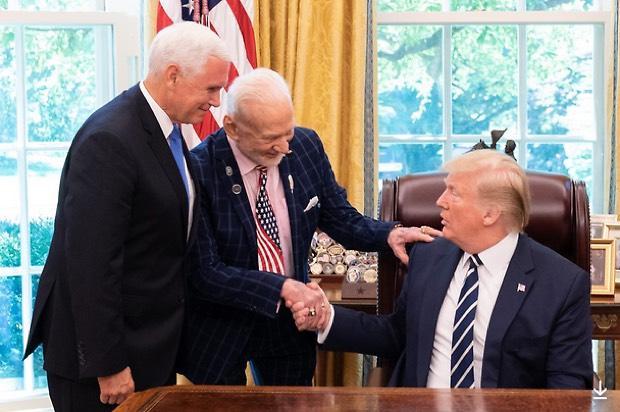 On at least two occasions earlier this year, Mr. Trump appeared to question the wisdom of a return to the moon, repeatedly asking why NASA can’t develop a direct-to-Mars approach.

The back-to-the-moon objective was written into Space Policy Directive No. 1, which was signed by the president during a White House ceremony on Dec. 11, 2017.

“The directive I’m signing today will refocus America’s space program on human exploration and discovery,” the president said. “It marks an important step in returning American astronauts to the moon for the first time since 1972 for long-term exploration and use.

“This time, we will not only plant our flag and leave our footprint, we will establish a foundation for an eventual mission to Mars and, perhaps, someday to many worlds beyond.”

NASA then began designing a mission architecture that would put astronauts back on the moon in the 2028 timeframe. But earlier this year, on March 27, Pence announced that NASA was being directed to move the landing up to 2024, a decision he said came directly from the president.

On May 13, the administration asked Congress for an additional $1.6 billion for NASA’s fiscal 2020 budget to help keep the SLS program on track and to begin initial work on a new moon lander. Then, on June 7, Mr. Trump shocked the space community with a tweet that raised questions about his support for the moon-first initiative.

“For all of the money we are spending, NASA should NOT be talking about going to the Moon – We did that 50 years ago,” the president tweeted. “They should be focused on the much bigger things we are doing, including Mars (of which the Moon is a part), Defense and Science!”

This past Friday, the president again questioned the moon-first strategy. During a White House event to mark the Apollo 11 anniversary, Mr. Trump raised the topic several times in a photo-op chat with Pence, moonwalker Buzz Aldrin, Apollo 11 crewmate Mike Collins, NASA Administrator Jim Bridenstine and others.

An artist’s impression of a Space Launch System rocket on the pad awaiting a flight to the moon. NASA

“To get to Mars, you have to land on the moon, they say,” the president said. “Any way of going directly without landing on the moon?” he asked. “Is that a possibility?”

Bridenstine, repeating the views of many within NASA, answered that the moon offers a relatively nearby proving ground to test the hardware and techniques necessary for much longer Mars missions. The recent discovery of ice in permanently shadowed craters at the moon’s south pole also promises a potentially useful source of water, air and rocket propellant, all of which would be critical to a Mars voyage.

Mr. Trump asked Collins his opinion, and the Apollo 11 veteran said he favors a direct-to-Mars approach.

“You like it direct? It seems to me Mars direct,” Trump said. “Who knows better than these people? I mean, they’ve been doing this stuff for a long time.” Turning to Bridenstine, he again asked, “What about the concept of Mars direct?” The NASA administrator again explained why the agency believes the moon is the better near-term target.

Pence laughed at suggestions the president was opposed to NASA’s current strategy. He said Saturday the president’s comments and questions did not reflect a disagreement about U.S. national space policy and the directive to put astronauts back on the moon before considering flights to Mars.

“What the American people saw is the president I serve with every day,” Pence said. “He always wants to go farther, faster, sooner. And so, asking the tough questions, with the experts in the room, having Buzz Aldrin standing there, having Mike Collins standing there, getting their opinions, that’s just how President Trump operates.”

He said “the only person that’s more impatient about our space program than the vice president is the president. … He wants to send America on an unalterable trajectory to put astronauts on Mars. And we all understand that to do that, first, we’ve got to have American rockets going up from American soil. And literally, within the next year, we’ll have American astronauts going back into space from right here in the U.S.A.