San Juan, Puerto Rico – Protesters shut down the main highway that connects San Juan to the rest of the island. It appeared to be the largest demonstration yet — demanding that Gov. Ricardo Rosselló step down. They are protesting government corruption and leaked chatroom messages in which the governor and his advisers mocked victims of Hurricane Maria.

“Our schools are really poor right now,” one teacher told CBS News. “I don’t have a job right now because they’re closing schools.”

People chant slogans as they wave Puerto Rican flags during a protest calling for the resignation of Governor Ricardo Rosselló in San Juan, Puerto Rico, on Mon., July 22, 2019. Reuters

Puerto Ricans, already reeling from Hurricane Maria and debt crisis, recently learned that the FBI arrested the former heads of the education and health insurance departments for allegedly funneling money to friends.

And the final straw: a trove of leaked chat messages between Rosselló and top aides. In one exchange, Rosselló’s former chief financial officer said, “Don’t we have some cadavers to feed our crows?” in the aftermath of Hurricane Maria.

On Monday, the governor — speaking on Fox News — faced a question he’s struggled all week to answer: Whose support do you have?

He named a local major of San Sebastian. That mayor told CBS News he does not support the governor. 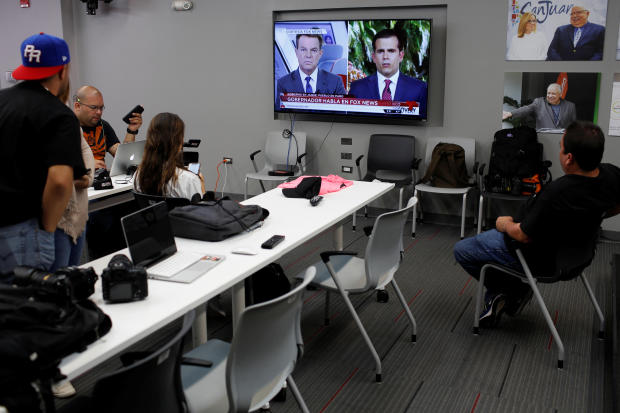 People in a conference room watch a television broadcast of Puerto Rico’s governor Ricardo Rosselló speaking during an interview, after a protest calling for his resignation in San Juan, Puerto Rico on Mon., July 22, 2019. Reuters

Neither does Donald Trump, who said Monday that “he’s a terrible governor.”

‘The U.S. Congress handed them $92 billion and that $92 billion is in the hands of incompetent people and very corrupt people,” the president added.

That number is not true.

Puerto Rico has received $14 billion in the aftermath of Hurricane Maria.

Puerto Ricans have their own concerns about how federal aid is being spent and have lost trust in their government.