Washington — The House committees leading the impeachment inquiry released a trove of messages provided by the former special envoy to Ukraine who resigned abruptly last week. The messages show a concerted effort by U.S. diplomats to get the Ukrainian government to commit to opening investigations that would benefit President Trump politically.

On Thursday, the president suggested China and Ukraine should open investigations into Joe and Hunter Biden, stating publicly what he is accused of insinuating on the July call with the Ukrainian president at the center of House Democrats’ impeachment inquiry.

“I would say, President Zelensky, if it was me, I would start an investigation into the Bidens,” he said, referring to the Ukrainian leader.

Speaking to reporters on the White House lawn on Thursday, Mr. Trump also said the Chinese president may want to investigate Biden and his son.

“Clearly it’s something we should start thinking about,” he said.

Also on Thursday, the Pentagon said it had begun in June to release $250 million in Ukraine aid approved by Congress, but in late July, on July 25 or 26, the White House Office of Management and Budget ordered a pause in the disbursement of those funds. Mr. Trump’s conversation with Zelensky took place on July 25.

Thursday, 10:38 p.m.: The chairmen of the three House committees investigating the Ukraine matter sent a letter to colleagues and released a trove of materials provided by Volker, the former special envoy to Ukraine. Find them here and below:

The text messages were from Volker to other officials including Bill Taylor, Charge d’Affaires at the US Embassy in Ukraine, Gordon Sondland, U.S. Ambassador to the EU, Andrey Yermak, aide to Zelensky and the president’s personal lawyer Rudy Giuliani.

These texts reflect a clear effort by Volker and Sondland to get Zelensky to make a public statement promising to investigate Burisma and the 2016 elections. In return, the Ukrainians wanted a White House visit and a “reset” of US-Ukrainian relations. Volker and Sondland assist Zelensky’s aide in writing the statement, with input from Giuliani. Throughout the exchanges, Taylor raised concerns about Ukraine becoming an “instrument” for domestic politics and the entirety of the aid-for-investigations proposition. — Rebecca Kaplan and Olivia Gazis

Ex-U.S. ambassador to Ukraine was given ultimatum to leave, source says

Thursday, 6:42 p.m.: A former official told CBS News it was made clear to former U.S. Ambassador to Ukraine Marie “Masha” Yovanovitch in the spring that it was the White House that had a problem with her. She was given an ultimatum that she quietly leave her post in Kiev early or face consequences, the official said.

Rudy Giuliani told The Wall Street Journal on Thursday that the president himself discussed removing Yovanovitch from her post. Giuliani also said he personally discussed the matter with Pompeo. Pompeo approved the removal but has not since replaced her.

Despite extraordinary targeted political attacks in Ukraine and from Donald Trump Jr. himself, Pompeo never publicly defended Yovanovitch, which has caused a lot of concern within the foreign service. Yovanovitch is a three-time ambassador and well-respected among fellow diplomats.

The former official told CBS News that the fact that someone as high ranking as a U.S. ambassador could face political targeting has sent chills through the State Department.

“It is concerning to have no one speak up,” a senior foreign service officer said. “There has not been a word of defense or support.”

“These are career professions and they don’t do politics. They serve their country just like the military. This isn’t Obama’s ambassador. This is the U.S. ambassador.”

The official said the administration “has politicized the State Department. But this is another level.”

It is still ultimately up to the State Department to decide whether to allow Yovanovitch to appear before Congress next week. Negotiations are still underway regarding how the expected deposition will be carried out. Those details include the question of who will be in the room with her when she answers questions. The State Department lawyers would be representing the administration, not Yovanovitch.

George Kent, deputy assistant secretary in the European and Eurasian bureau, is also expected to be deposed. Kent’s email exchanges expressing concern in March 2019 about the politically motivated attacks on Yovanovitch were revealed in documents presented to Congress by the State Department inspector general on Wednesday and obtained by CBS News. — Margaret Brennan 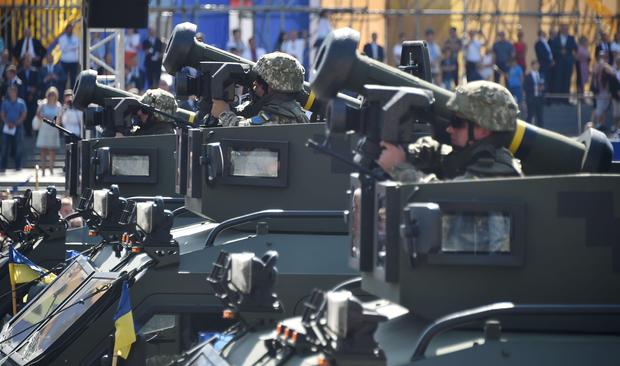 Thursday, 3:38 p.m.: The State Department informed Congress it has approved a potential $39.2 million sale of 150 Javelin anti-tank missiles and 10 launchers to the Ukrainian government. The Javelins were discussed during the July 25 call between Mr. Trump and Zelensky, the president of Ukraine.

In the call, Zelensky said he was “almost ready” to purchase the missiles, which are effective for destroying Russian tanks. Zelensky’s comment prompted Mr. Trump to respond that he would “like you to do us a favor though” and raise Ukraine’s cooperation with the Justice Department’s investigation into the origins of the Mueller probe. Mr. Trump brought up the Bidens later in the call.

The State Department said the deal, which is not yet final, also includes training and support services.

“This proposed sale will contribute to the foreign policy and national security of the United States by improving the security of Ukraine,” the department said in its notification to Congress. “The Javelin system will help Ukraine build its long-term defense capacity to defend its sovereignty and territorial integrity in order to meet its national defense requirements.” — Stefan Becket