The 2020 Census: How our nation in counting on us

Toksook Bay, Alaska, on the Bering Sea, is about as far-away-from-it-all as you can get and still be in the United States. Steve Dillingham, director of the U.S. Census Bureau, flew in on a frigid January day to count the very first person in our nation’s 2020 census, the constitutionally-mandated, once-a-decade count of every single person within our borders.

Americans at Toksook Bay, Alaska were the very first to be counted in the 2020 census. Its population in 2010 was 590. CBS News

“It was very emotional to me,” Dillingham said. “The entire village had gathered. They were playing native music. They were celebrating the 2020 census. And I just hope we can replicate that across the nation.”

And Dillingham is not alone in his passion for the census.

In February, correspondent Chip Reid traveled to the warmer climate of Houston, Texas, where he found activists going door-to-door to make sure their communities will be fully counted.

Belaynesh Andarge, an Ethiopian immigrant who goes by “Miss B,” is helping promote participation in the census to residents, as part of a campaign called “Yes to the Census.” When asked what kind of reception she has had when she goes door-to-door,” she replied, “Some people are very happy to see us. Some people don’t even open the door.”

Miss B said many people have no idea how important the census is. Not only does it determine how many votes each state gets in Congress, but also how trillions of federal dollars are divvied up over the next decade. “They need to know the benefits,” she said. “The school lunches, the road construction, the parks, the healthcare.” 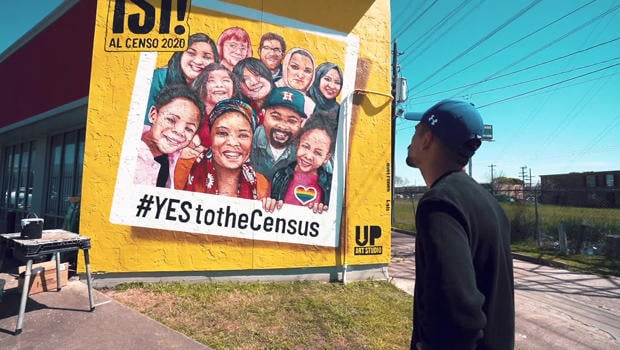 Community activists in Houston are promoting participation in the 2020 census. CBS News

Reid asked Judge Lina Hidalgo, the executive of Harris County (the largest county in Texas, which includes Houston, the nation’s most diverse big city), “Where does the census rank on your list of priorities?”

“It’s pretty much near the very top,” Hidalgo replied. “For every person who doesn’t respond to the census, we lose around $1,000.”

Hidalgo said, in the 2010 census Latinos and especially immigrants were significantly under-counted. One of the biggest challenges in 2020, she told Reid, is fear: “There was a fight about whether the census would include a citizenship question. So, folks who are seeing on TV, you know, families being torn apart, who perhaps know somebody who’s being deported, are now afraid that the census is gonna ask them whether or not they’re U.S. citizens.”

Last year the U.S. Supreme Court rejected a Trump administration proposal for the census to demand everyone’s citizenship status.  But Hidalgo said the damage has been done. “The community’s heard so much about it, that we’re now having to debunk the myth that it is part of the census,” she said. 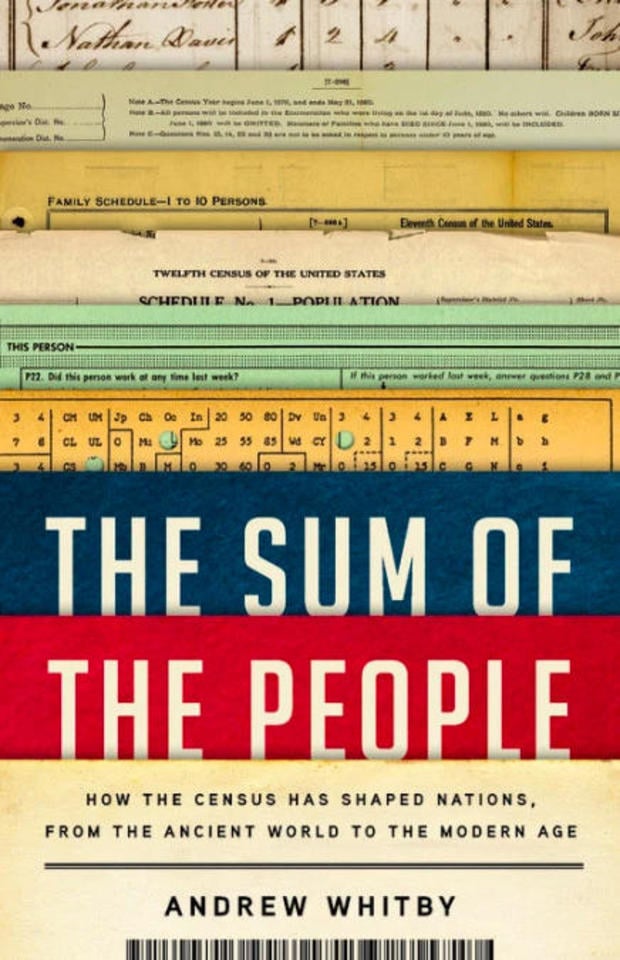 You might be surprised by just how long the idea of a census has been around. “The census comes up again and again in the Old Testament,” said author Andrew Whitby. In his new book, “The Sum of the People: How the Census Has Shaped Nations, from the Ancient World to the Modern Age,” he cites the example in the book of Exodus, when Moses ordered a count of all males age 20 and older.

The census played a major role in the New Testament, too, in the book of Luke, in which Mary and Joseph, from Nazareth, went to Bethlehem, a hundred miles away, where Jesus was born. Whitby said, “The ostensible reason in the Bible is that there was a Roman census court, that Caesar Augustus had decreed that there should be a census of the entire Roman world.”

The first U.S. census was carried out in 1790, one year after George Washington was sworn in as President.

In less than a hundred years, the population had increased tenfold, and engineer Herman Hollerith invented an electric tabulating machine to count all those people. Hollerith’s 19th century startup business became IBM. 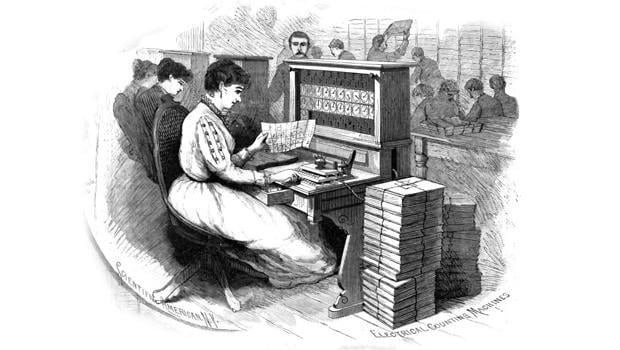 Reid asked, “Would it be fair to say that the census has actually played a role in the invention or development of the computer?”

“Yeah, I would say that,” Whitby replied.

Score one for the census.

And it’s a good thing Hollerith came along because, as Richard Threlkeld explained on “Sunday Morning” 40 years ago, “In 1890 Americans had to answer 470 questions, including one that wanted to know if there were any idiots in the family.” 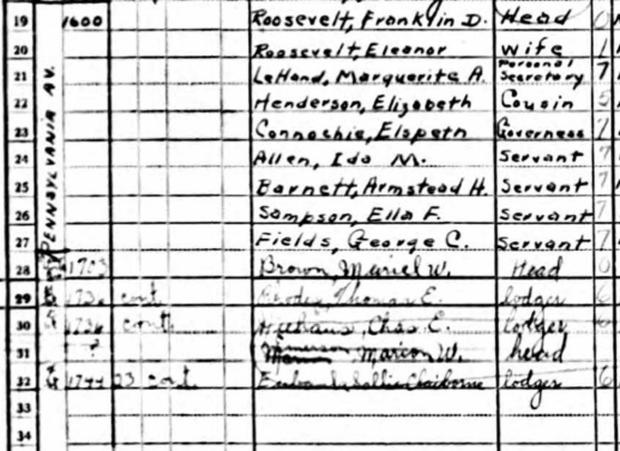 Lucky for us, today there are just nine basic questions.

Yet the very simplicity and importance of the census have recently tempted politicians to disguise fundraising appeals as census forms. The Republican National Committee recently sent out fundraising letters with “official” and “census” on them. President Trump’s campaign has also used the word “census” in its voter outreach. 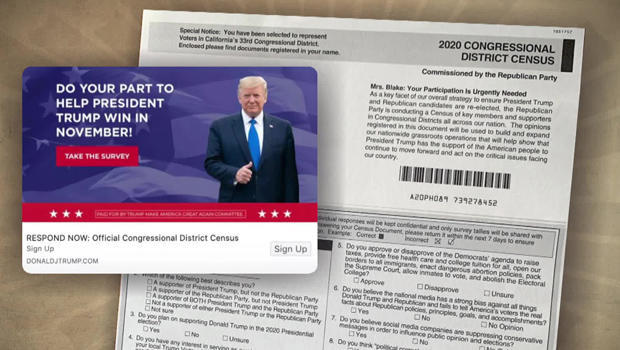 Fundraising mailers and ads distributed by the Trump campaign and the Republican National Committee purported to be official census business.   CBS News

“The census is a public treasure; it is our collective information,” said California Democratic Congresswoman Katie Porter. “And so for some organization – in this case the Republican National Committee, and later President Trump’s campaign committee – to try to hijack this non-partisan public trust in the census for personal political gain is wrong.”

In February, Porter, who sits on the committee that oversees the Census Bureau, confronted Census Director Steve Dillingham over those political fundraising mailings:

Porter: “Have you asked the RNC to cease and desist from using the term ‘2020 Census’ or “Official census’ in its mailings?”
Dillingham: “Congresswoman, I would have to look and see. I’m not sure who sent that out.”

Reid asked Porter, “And you’re gonna hold Mr. Dillingham’s feet to the fire on this?”

Reid asked Dillingham, “Do you feel pressure from this White House, and the Republican Party, to do this count in a way that they would like?”

“No, I do not,” Dillingham replied.

And soon after our interview, the RNC promised to stop using the word “census” in its mailings, and Facebook has dropped the Trump ads.

The coronavirus, of course, poses an entirely different and unprecedented challenge to the census.

The Census Bureau encourages Americans to fill out the census online at 2020census.gov, and they report that close to one-third of households have already responded. 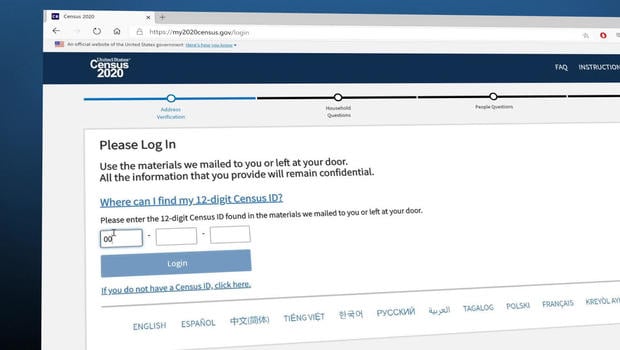 The 2020 census form can be filled out online.  CBS News

Pandemic or not, Director Steve Dillingham said the work of the Census Bureau is going forward.

Reid asked, “Bottom line, your message is, ‘Respond online, on the phone, or by mail, and then we won’t come knockin’ on your door’?”

“It is,” said Dillingham. “Absolutely. And that’s the message we hope will resonate with everyone.”