Open fires are the oldest cooking method in the world — but Francis Mallmann has taken them to new levels. Mallmann, who had an early start in French kitchens, has been honing the primal technique for two decades — and now cooks by open flame for the likes of Gwyneth Paltrow and David Beckham.

When he prepared a feast with “CBS This Morning Saturday” co-host Jeff Glor, Mallmann’s work began just after 6 a.m.

“There’s so many details. It’s such a fragile thing to cook with fires,” he said. “People think it’s a beastly thing, it’s a manly thing. But it’s not, it’s extremely fragile.”

First, Mallmann’s chefs hung a rib eye slathered in chimichurri sauce. A dozen organic chickens came next. Both meats are staples of Mallmann’s custom domes, which are now a global phenomenon.

Mallmann also hung an array of vegetables and fruits, including pineapple and cabbage. Each ingredient was suspended above the flames by wires cut to a precise length to control for cooking time and temperature. Wood is placed around the perimeter of the dome, and lit.

“Every day is different, depending on the wind, on the heat of the wood,” he said. “This morning it was sort of a blind date with the wood, which is great. I didn’t know what sort of heat we would get from it but it worked out well.”

Nearby, a whole lamb was set on an iron cross, with flames below. Mallmann periodically basted the lamb with a mixture of herbs and butter.

“We baste all the food every hour,” he said. “And so even the pineapples, we put it in a syrup of pineapple every hour, so it’s dripping, it’s wet.”

His goal at this, and every, fire is to omit needless ingredients — which he called “the most difficult thing in cooking.”

“If you have a fish that’s just cooked in the wood oven, and you just put on it a little sea salt and olive oil, I mean, it has to be perfect,” he said. “If you hit those things, it’s the most delicious things you will ever eat.” 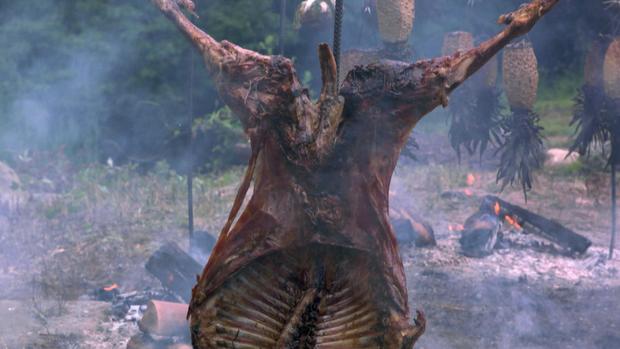 Mallmann’s choice to embrace the minimalist style is a return to his roots in Patagonia.

“I think that childhood is where we always go back,” he said. “Sometimes, you know, I’m sitting in a very difficult meeting and I’m anxious, and I go back to childhood. I remember the rain, the snow, the win. And I get cured immediately.”

Mallmann has been a legend in South America for half his life. But his 2009 book, “Seven Fires,” put him on the map in America.

“I think that we achieved a lot in the books. But at the end, you have to start your fire, stand in front of it, put your meat, and understand what’s happening,” he said. “There’s no way out. It’s a craft, cooking. You have to do it. There’s no way out.”

“That’s why, you know, sometimes my chefs say, ‘Chef, I’m so bored of doing this steak. I’ve been doing it for two years. I can’t stand it anymore,'” Mallmann said. “And I say, ‘Well, you know, but what you’re learning is not about the steak. You’re learning about how to stand, how to move.’ And that’s something that you can’t learn in a book.”

Eight hours after the fire started, dinner was served. Dishes included string-hung chicken with cauliflower, salmon with cabbage and aioli, and lamb with sweet potatoes, squash, onions and gremolata. For dessert, he served up burnt peaches and plums with pineapple, mascarpone, and amaretto — along with plenty of wine.

But Mallmann said he wants people to get more from his cooking than just good food — he wants them to think about “freedom.”

“I think there’s a lot of fear. I think the worst enemies we have are fear and routine,” he said. “Because they both freeze us. You know, when you’re fearful you’re like that, and when you’re in a routine, too, you can’t get out of it. And I think that change is the most important thing in life.”