Thousands of people marched across the Brooklyn Bridge on Sunday as part of an anti-hate rally amid a spate of hate crimes against the Jewish community. New York Governor Andrew Cuomo said at the march that he planned to propose a new state law that would label hate crimes as domestic terrorism, CBS New York reported.

“These are terrorists and it should be punished as such,” Cuomo said.

There were a series of anti-Semitic attacks in the New York area at the end 2019 and on December 28, a man stabbed five people as they gathered at a rabbi’s home north of New York City to celebrate Hanukkah. Grafton Thomas, 37, was arraigned last week and pleaded not guilty to five counts of attempted murder and one count of burglary.

Cuomo said Sunday that there would be an increase of the state police force and a higher presence of the hate crimes task force in vulnerable communities.

People participate in a Jewish solidarity march across the Brooklyn Bridge on January 5, 2020, in New York City. The march was held in response to a recent rise in anti-Semitic crimes in the greater New York metropolitan area. Jeenah Moon / Getty

“While we’re here today in the spirit of solidarity and love, government must do more than just offer thoughts and prayers. Government must act. This is illegal and it is government’s responsibility to protect the people of the state of New York, and the state government will be doing just that,” Cuomo said.

Senator Chuck Schumer also spoke before the march and rally, saying, “We will not only speak and march, but we will act.”

The senator announced he is introducing legislation that would protect houses of worship.

“They need to be protected, and so our proposal, we were able to get a $30 million increase in a grant to protect houses of worship last year. I am now proposing that it quadruple to $360 million,” Schumer said. “That will allow our houses of worship to fortify themselves with cameras and gates and strong doors and will allow them to hire security so that they can protect themselves.”

Schumer said he is also proposing that the federal government spend $100 million to help coordinate with local police groups to fight . 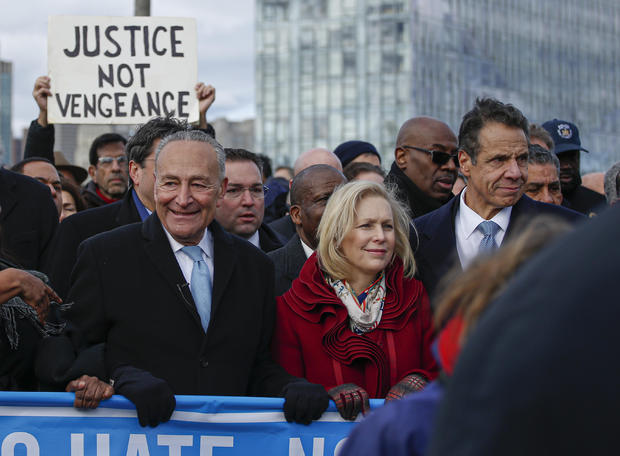 “Many of our local police groups don’t have the expertise that the federal government has to do just that, and if we fight hate crimes and we can go after those who perpetrate them and those who encourage them and act on them, we can do a lot of good,” he said.

The NYPD says there have been at least 14 reported anti-Semitic attacks in the last two weeks.

Officers are now looking into another possible hate crime in Brooklyn. Police say a group of three people walked into a kosher bagel store on Friday and made threatening anti-Semitic remarks. The suspects were taken into custody, but no one has been charged at this time.

The majority of those hate crimes were anti-Semitic in nature, but many groups were targeted for reasons including religion and sexual orientation.

The march concludes with a rally in Columbus Park.