“We need to battle darkness with light”: Rabbi wounded in attack offers inspiration

The rabbi who heroically survived the deadly shooting at Chabad of Poway on Saturday addressed members of the media and offered words of courage and inspiration. Speaking in front of Chabad of Poway on Sunday afternoon near San Diego, Rabbi Yisroel Goldstein said, “We need to battle darkness with light,” and thanked President Trump for giving him a personal phone call following the fatal shooting.

“I see a sight that is indescribable,” the rabbi recalled of running into the gunman. “Here is a young man with a rifle, pointing right at me. And I look at him. He has sunglasses on. I couldn’t see his eyes. I couldn’t see his soul. I froze.” Goldstein ended up losing a couple of fingers in the shooting, raising his bandaged hands to the camera throughout his press conference.

Police say the suspect, John Earnest, 19, opened fire on worshippers celebrating the last day of Passover at Chabad of Poway, leaving one woman dead and three others injured. The woman who was killed has been identified as Lori Gilbert-Kaye, 60, who friends said was shot while trying to protect the rabbi. She was pronounced dead after being taken to the hospital.

“For those of us who know Lori, she is a person of unconditional love,” Goldstein said. “I have known her for close to 25 years and she was a pioneer member of our congregation. She used to work for Wells Fargo … and she helped secure us the loan for [the synagogue]. She was the one who always went out of her way for those in need.”

“I walk into the lobby and I see Laurie laying on the floor unconscious,” the rabbi recounted. “And her dear husband, Dr. Howard Kay, who’s like a brother to me, is trying to resuscitate her and he faints, and he’s lying on the floor there next to his wife. And then their daughter Hannah comes out screaming, ‘Daddy, Mommy what’s going on?’ It’s the most heart wrenching sight I could have seen. I was frozen in time.”

Mourners and well wishers leave flowers at a make-shift memorial across the street from the Chabad of Poway Synagogue on Sunday, April 28, 2019, in Poway, Calif., one day after a teenage gunman opened fire, killing one person and injuring three others including the rabbi as worshippers marked the final day of Passover, authorities said. Getty

The shooting occurred shortly after 11:30 a.m. Saturday morning, when Earnest allegedly entered Chabad of Poway and opened fire on worshippers with what appeared to be an AR-15 rifle, San Diego County Sheriff William Gore said Saturday. After engaging in a firefight with an off-duty Border Patrol agent, Earnest fled the scene and later called police to turn himself in, Gore said.

“Miraculously, just miraculously, the gun jammed,” Goldstein said of Saturday’s attack. “After the shooter left, this terrorist left, I turn around to assess the situation … I said ‘I gotta do something’ — I got up on a chair, right there and I looked at our congregation and I said ‘We are a Jewish nation that will stand tall, we will not let anyone or anything take us down. Terrorism like this will not take us down. We just came from Passover at the savior table. We sang the song that God has protected us, that every generation they rise up against us but God will protect us. Yesterday this horrific terrible event that occurred here in my own interpretation, Laurie took the bullet for all of us, she died to protect all of us. She didn’t deserve to die.” 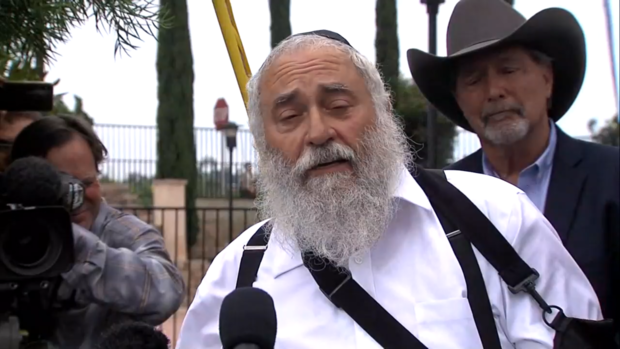 Goldstein suggested that the United States possible take time to mandate moments of silence before each school day, so students can reflect on what makes life meaningful.

“How does a 19 year old have the audacity the sickness, the hatred to publicize such anti-Semitism in his manifesto?” the rabbi said Sunday night. “How does he come here to our house of worship and do what he did? Perhaps we need to go back a little earlier and think about what are we teaching our children? What are we educating our children? We need to perhaps think about reintroducing in our public school system a moment of silence where children can start the day pausing and thinking, ‘Why am I created? Why am I here? And what am I going to do?'”

“It could’ve been a much worse massacre … we need to battle darkness with light, no matter how dark the world is we need to think of a little bit of light pushes away a lot of darkness,” Goldstein said. “A lot of light will push away a lot more. And the Rabbi would say we all need to teach everyone, we need to do random acts of kindness, we need to tilt the scale. There’s so much darkness now in the world but you and I have the ability to change.”

Rabbi Golstein said President Trump personally called him during his recovery period yesterday, offering support. Goldstein said he and the Mr. Trump spoke for over 10 minutes.

The mayor of the California city where a gunman opened fire at a synagogue Saturday called the shooting “an affront to humanity” that made him “sick to my stomach.”

“This is an affront to our community and an affront to humanity for this to happen,” Steve Vaus, the mayor of Poway, California, said in an interview Sunday on CBSN. “Hate has no place in any community, least of all a community like Poway.”