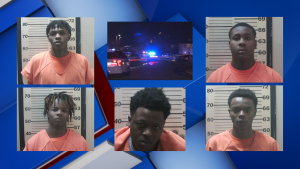 The shooting happened late last month near Chadwick apartments and the MSU campus.

Investigators say Kirkland and the victim were both shot and driven to the hospital separately.

They have both since been released.

All of the suspects are from Holmes County.

Winters and Sly were arrested yesterday.

The U.S. Marshals assisted in the arrests.

Giant cross raises over Saltillo along intersection of Highway 45, 145