The streets will reopen pending traffic following the parade. Do not drive into the parade route until all barricades have been taken down.

The official press release can be found here 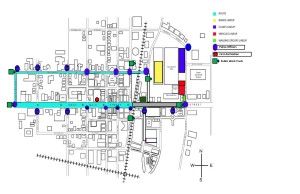