On July 21, 1853, the New York State legislature voted to set aside hundreds of acres in the middle of Manhattan Island for a central park.

The nature-loving journalist Frederick Law Olmstead teamed up with architect Calvert Vaux to submit the winning design for the park.

Completed in 1876, Central Park provides an oasis of carefully landscaped nature in the heart of a city chock full of steel and concrete.

From cycling to croquet, there’s room in Central Park for every form of recreation, and plenty of space as well for public events … both great and small.

Everything from Simon and Garfunkel’s reunion concert in 1981 …

To Christo and Jean-Claude’s art installation “The Gates” in 2005.

Still, some activities are strictly out of bounds. In 1986 a man named Steven Brill was arrested for eating some of Central Park’s protected plants. He defended his action as an homage to nature: “It’s not like going into a fast-food place and ordering something,” Brill said.

A defense that left Parks Commissioner Henry Stern unmoved: “Instead of eating in the park, they eat the park!”

Not to worry. At nearly a century-and-a-half old, Central Park is as full of greenery as ever and, as always, open to all. 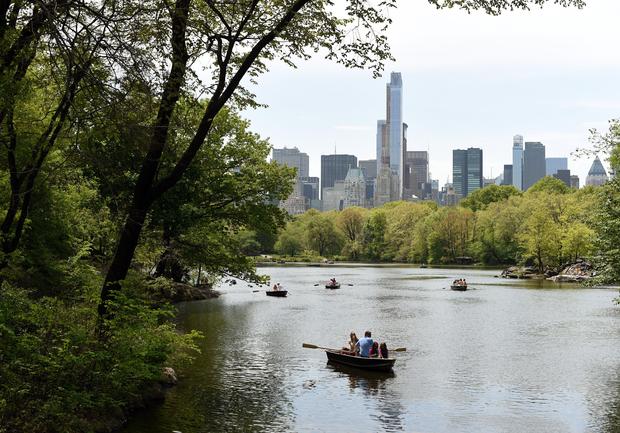 With a section of the Manhattan skyline in the background, people row around the lake in Central Park in New York City, May 12, 2014. Timothy A. Clary/AFP/Getty Images