COLUMBUS, Miss. (WCBI)- In late November, Derrick Seals was hit by a vehicle and killed. The driver left the scene without calling for help or checking on Seals.

Investigators with the Columbus Police Department have been searching for the person behind the wheel. Now they believe they may have identified the vehicle and they need your help to find it. Initially, investigators were looking for a dark car. 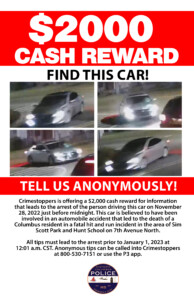 “We’ve been ruling out vehicles and initially it was a black SUV and a black car. We’ve found those vehicles and ruled them out as part of this and now we’re focused on the light-colored car,” said captain Rick Jones with Columbus police.

Now Columbus police are searching for this lighter car that they believe is silver or white. This is a video from the scene that night that was given to WCBI

Golden Triangle Crime Stoppers initially offered a reward of $1,000 leading to an arrest in the case. They’re increasing that to increase the chance of finding the driver.

“Crime stoppers give $1,000 on any crime that leads to an arrest in a case but during November and December they double that so it will be a $2,000 reward that will be for any information leading to an arrest and that will be good up until January 1,” said Jones.

Columbus police or Golden Triangle Crime Stoppers if you can identify the vehicle.