Cooler end to the work week

COLUMBUS, Mississippi (WCBI) – Much quieter and cooler weather builds in after Wednesday’s storms. Frost is possible for some Friday morning.

THURSDAY: Gradual clearing is expected later in the day, but daytime highs are likely to stay in the lower to middle 60s with a westerly breeze of 20 mph.

THURSDAY NIGHT: With relaxing winds and a clearing sky, temperatures will drop into the 30s for most spots. A frost advisory is in effect for Alcorn, Chickasaw, Calhoun, Lafayette, Union, Pontotoc, and Yalobusha counties. 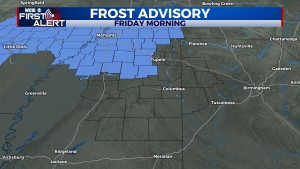 FRIDAY: With high pressure in control, expect plenty of sunshine and highs in the mid to upper 60s.

WEEKEND: A brief increase in cloud cover could occur with a disturbance passing through early Saturday. A spotty shower or two is possible as well, but most places will stay dry. Expect a clearing sky Saturday afternoon, and mostly sunny weather looks to continue Sunday.

NEXT WEEK: Monday starts the week dry, but showers and locally strong storms appear possible again Tuesday. The potential severity of the storms remains in questions, but it’s something we’ll monitor over the next few days!