The Cessna Citation business jet rolled off the end of runway 24 and caught fire after landing at the airport at 3:40 p.m., the Federal Aviation Administration (FAA) said in a statement. Videos on social media showed a large plume of smoke and the aircraft on its side.

Kelley Earnhardt Miller confirmed her brother and his wife and 15-month-old girl, Isla, were on board the plane. “Everyone is safe and has been taken to the hospital for further evaluation,” she tweeted.

Two pilots were behind the controls of the Cessna. Officials didn’t immediately release their identities.

“We’re incredibly grateful that Dale, his wife Amy, daughter Isla, and the two pilots are safe following today’s accident,” NBC Sports said in a statement to The Associated Press. “After being discharged from the hospital, we communicated with Dale and his team, and we’re all in agreement that he should take this weekend off to be with his family.”

Earnhardt Jr. and his family were in the area near Bristol Motor Speedway where he was expected to join the broadcast team to cover the race this weekend.

A reporter with WJHL-TV tweeted video from the scene and said a “portion of the plane” was on fire in the water. Firefighters at the airport said they were “burning off” excess fuel that spilled at the airport, but it didn’t pose an environmental threat.

Video posted on Facebook showed the aftermath of the crash. It appeared the Earnhardt’s dog was also on the Cessna and survived.

The FAA will investigate and two investigators with the National Transportation Safety Board will determine the probable cause of the accident.

Plane crash on stoney Creek. Looks like everyone out ok Edit: Earnhardt Jr.’s plane. Everyone is out and ok.

Earnhardt Jr. retired from NASCAR in 2017 and has since been working as an analyst and was slated to join the broadcast team for Saturday’s Cup Series event in Bristol, Tennessee. The Earnhardt family is no stranger to tragedy. Earnhardt Sr. — one of the most revered names in all off racing — died at the 2001 Daytona 500 in a crash. “Junior,” as he is known, went on to win the Daytona 500 two times. 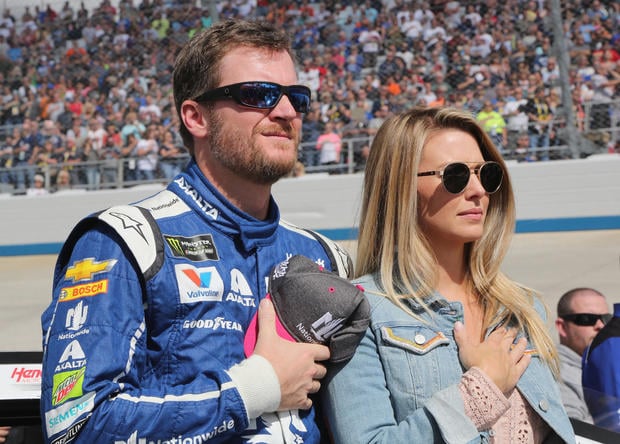 Omar Villafranca contributed to this report.