Did a New York wedding lead to an attempted murder in Florida?

A wealthy Florida man is arrested after a violent confrontation with his wife — she survived. Did his daughter’s wedding lead to a murderous rage? Correspondent Peter Van Sant reports in “Reuschel vs. Reuschel,” an all-new “48 Hours” airing Saturday, April 4 at 10/9c on CBS.

“Never in one million years would I think that my wedding would be the catalyst of all of this,” Caroline Reuschel said of her father Mike Reuschel’s charge with the attempted murder of her stepmother, Sue Reuschel.

Caroline Reuschel’s wedding was in November 2017, exactly three months before the incident that led to her father’s arrest. And from the text messages that came to light during legal proceedings it appears that Caroline was a focus of the conflict between her father and stepmother that had been simmering for years.

Caroline Reuschel on her wedding day.

The wedding itself was picture-perfect. The bride wore an $11,000 gown from Bergdorf Goodman and stepmother Sue spent another $9,000 on her own dresses for the weekend. And there was the venue — a massive Roaring ’20s mansion named Oheka Castle that is perched on 443 acres on Long Island’s wealthy “Gold Coast” about an hour outside of Manhattan.

“My husband and I know how lucky we are to have had that weekend,” Caroline told Van Sant, becoming emotional as she remembered the occasion. “It was beyond beautiful.”

Oheka Castle is the United States’ second largest private home, and a hot spot for celebrity weddings including Kevin Jonas, Hillary Clinton’s aide Huma Abedin, and media personality Megyn Kelly. And, in 2017, it was the site of a wedding that may have enflamed a marital conflict to its breaking point.

“We really just wanted to celebrate everyone coming together,” Caroline explained of the choice of venue. With 32 guest rooms, Caroline says Oheka Castle made practical sense for a wedding that was attended by guests from around the world.

“It was a giant slumber party with everyone we loved getting to know each other,” Caroline said. “It was amazing. And that’s all we wanted.” 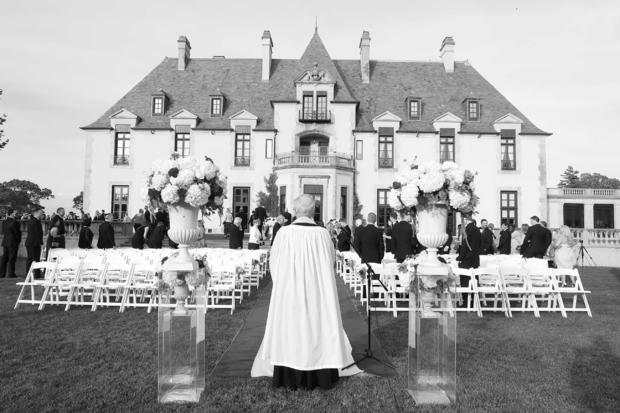 The  picture-perfect wedding was held Oheka Castle, a massive Roaring ’20s mansion perched on 443 acres on Long Island’s wealthy “Gold Coast” about an hour outside of Manhattan.

Sue began complaining to Mike about paying for Caroline’s wedding in texts dating back to 2015, suggesting Caroline was using Mike to pay for the party. Sue often criticized Mike’s ex-wife and two daughters in texts, but she seemed to have a had an intense dislike for Caroline — complaining about her often and calling her nasty names.

At Mike’s trial, Sue said she and Mike had agreed to a budget of $100,000 and that two weeks after Caroline’s wedding Mike told her that it had in fact gone more than $100,000 over that initial budget.

Mike and Caroline dispute Sue’s story and say the real cost was under $200,000. Caroline told CBS News that she and her now-husband paid for half of the total cost.

Regardless of the final dollar amount, Mike and Sue both say that their dispute over the wedding’s cost led to a massive fight on November 20, 2017 in their Gainesville, Florida home. Sue called the police that day, later telling the jury she felt things were getting “out of control.”

When police arrived that day, Sue admitted to pushing Mike and agreed to head to their beach condo to defuse the situation. But she was arrested some 30 minutes later when the officer says he didn’t think she was leaving promptly enough. 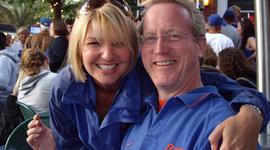 He said, she said: Evidence photos from the Reuschel attempted murder case

Mike Reuschel told police he and his wife Sue had been stabbed by an intruder, but she later told police her husband was the real assailant.

Sue was charged with domestic battery and was ordered to stay away from Mike. She moved to their beach condo and began anger and alcohol counseling. Mike declined to pursue the charges and they were later dropped.

By January 2018, Mike and Sue began seeing each other again and in February 2018 Sue came to Gainesville for a weekend visit. It was during that trip that the arguments between them went from bad to much, much worse.

Texts show that the night of February 2, 2018, the couple were again fighting about Caroline and at 3:30 a.m. on February 3, police again responded to a call from their Gainesville home, this time with an ambulance.

Mike told investigators that an intruder had attacked both him and Sue with a knife. Sue’s wounds were much more serious and she was trauma alerted to a hospital. But when Sue woke up from surgery she told detectives that there had been no intruder. She said Mike had stabbed her and he was arrested later that same day and charged with attempted murder.

At Mike’s 2019 trial he admitted the story of the intruder was a lie, but said Sue had attacked him that night and he had lied to protect her because she was scared of being arrested again. Mike testified that she had had been violent with him over a period of years — something Caroline says he confided to her soon after Sue’s arrest. Sue denies that she ever abused Mike and Mike never reported any incidents to police.

At Mike’s trial prosecutors argued that Mike attacked Sue that night after she threatened to divorce him because he didn’t want to give up half his fortune — millions of dollars — in a divorce. And Mike admitted on the stand that he didn’t think it was fair for Sue to get half in a potential divorce. 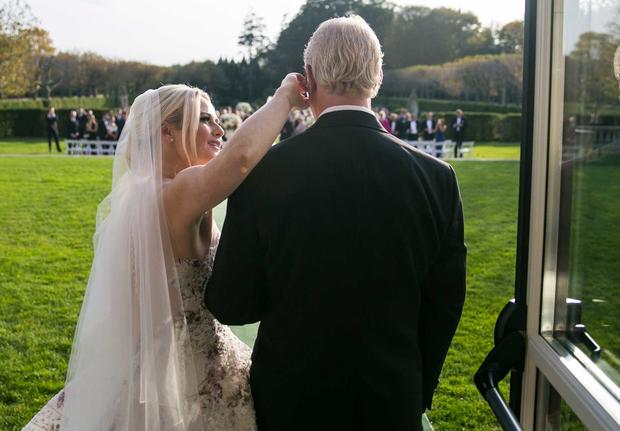 Just before their walk down the aisle, a photographer captures the moment Caroline Reuschel notices a long white scar down the side of her father’s face

Looking back on her wedding, Caroline can’t help but be haunted by a moment just before she took her vows. As she got ready to walk down the aisle, she noticed what she describes as a long white scar down the side of her father’s face.

“There’s a picture of me that my photographer actually captured of me, touching his face,” she said, “trying to figure out what it was.”