WEDNESDAY: Plenty of morning sun will give way to scattered clouds and ultimately isolated showers this afternoon. The coverage may be slightly higher compared to previous days, but should still not be overly impactful. Highs will reach the lower 90s with heat indices upwards of 91-94 degrees.

THURSDAY: Showers and storms become likely by midday into the afternoon hours as a slow-moving front moves through. Some storms may grow strong to severe with gusty winds the primary concern. Highs will reach the mid to upper 80s before storms develop. 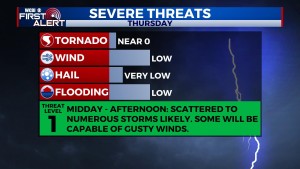 FRIDAY: Behind Thursday’s front, more pleasant (for June) weather will be in store with highs in the 80s and much lower humidity levels. 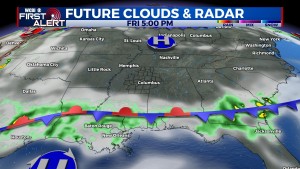 WEEKEND: Saturday is certainly the pick day of the two – expect lows to start in the 50s in the morning with highs in the mid 80s by afternoon. Sunday does bring back a small chance for afternoon rain, but humidity levels remain tolerable.

NEXT WEEK: A return to a more traditional early June pattern is expected, and that means small daily rain chances and plenty of heat and humidity. Highs will bounce back into the lower 90s by Tuesday.

TROPICAL UPDATE: Hurricane season for the Atlantic basin begins today. There remains increasing potential of a low pressure system in the southern Gulf to acquire tropical characteristics as it moves toward southern Florida later this week. The first name on the list is “Alex.”

Hot and Dry this Weekend, Cooler Next Week