JACKSON, Miss. (WCBI) – Too much marijuana. 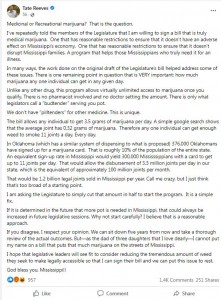 That’s why Governor Tate Reeves says he will not sign the current bill.

Mississippi voters approved medical marijuana in November of 2019. But the state supreme court found a problem with the way the initiative was put on the ballot.

Since then lawmakers have been working on a bill that would allow medical marijuana sales in the state. And, for months, supporters have been hoping for a special legislative session.

Now the governor says he believes the current bill would allow people to receive too much marijuana in one day.

The proposed bill would allow 3.5 grams of marijuana per person, per day for medical purposes. Medical marijuana would be sold in licensed dispensaries.

Today, the Governor said he thinks that’s too much.

He wants the legislature to cut that amount in half.