COLUMBUS, Mississippi (WCBI) – Quite the unsettled stretch of weather lies ahead for the next 36-48 hours. Cooler weather follows to close out the week.

TUESDAY: Much of the day will remain dry, cloudy, and increasingly breezy with highs in the 60s.

TUESDAY NIGHT: Heavy rain and embedded storms will move in from the west around midnight. While the air won’t be particularly favorable, some damaging wind & non-zero tornado risk will accompany the storms into the overnight as they move toward/just east of I-55. Eventually, the severe risk will lessen after 3a as storms continue shifting east; however, heavy rain will continue.

WEDNESDAY: Tuesday night’s storms will be just rain across northeast Mississippi to start the day. However, the parent cold front will have stalled, and yet another wave of low pressure is expected to develop along said front. This is likely to drag warmer, more unstable air north to Hwy 82 during the day. This will set the stage for developing storms to potentially become severe with all hazards possible after lunch. Storms will exit the region into Alabama late-day, ending the severe risk. 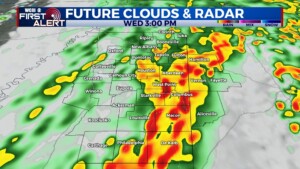 RAIN TOTALS: Widespread rain totals of 2-4″ are expected across the region with locally higher amounts. This will create a relatively high risk of flooding and/or flash flooding in some cases, so take any warnings seriously! 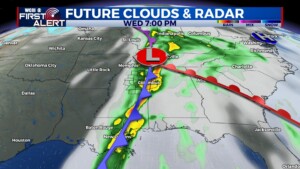 END OF WEEK: Cooler, sunnier weather is on tap for Thursday and Friday. Highs will be in the 50s both days with lows in the 30s.

WEEKEND: Clouds will increase as temperatures drop to near 50 degrees Saturday & Sunday. The first in a series of systems still looks to pass south of the region as higher rain chances will be along the coast.

NEXT WEEK: All eyes will be on the parade-train of systems slated to impact parts of the Southeast the week before Christmas. One or more of these could bring the risk of wintry precipitation, but details are simply not known just yet. Stay tuned as trends are watched!

Week ahead will be wet