COLUMBUS, Mississippi (WCBI) – Temperatures stay in the 90s to start the week, but higher rain chances later in the week will help bring down heat levels.

MONDAY: Expect plenty of sun through the day with highs in the mid to upper 90s. The best chance for afternoon storms will be in areas near the MS/AL state line after 3p. Any storm taking advantage of the environment could briefly pose a threat for gusty wind as they move/develop south/southeast.

TUESDAY: The best axis of moisture lines up across the central part of the state, taking the best chance of rain with it. Isolated showers or a brief storm will remain possible across northeast MS, but most places should stay dry with highs in the low 90s.

WEDNESDAY: This still looks to offer the best chance for widespread rain and storms. If storms are delayed until early afternoon, a few could become strong; however, if storms arrive early, any severe threat would likely not develop. 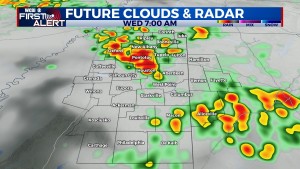 REST OF WEEK: Wednesday’s front is likely to stall across the central MS/AL vicinity, keeping at least scattered showers in the forecast through Thursday and Friday. The benefit is highs should stay in the middle 80s!

WEEKEND: Confidence remains low as to what happens with the stalling front. Indications are for now Saturday should be mostly dry followed by an increase in scattered storms again Sunday afternoon.

Seasonal Temperatures On the Way