How can a parent forget their child in the car? A psychologist explains

At least 48 children have died in 2019 from being left in hot cars, close to matching 2018’s record number, 54. The most recent death occurred in Phoenix on Tuesday, after a 4-month-old was left inside a van on a 91 degree day.

The deaths are overwhelmingly accidental: 84% of cases in the last three decades were either kids getting into a car on their own or being unintentionally left behind. And while many wonder how a parent could forget their child in a car, mental health experts say it’s really about a change in routine and the way our brains are wired.

“We have kind of a brain autopilot system that allows us to go from point A to point B without thinking about it,” said Dr. David Diamond, a psychologist and leading researcher in the field. “It actually suppresses our awareness that the child is in the car.”

“What is so tragic is that they think they’ve actually gone to the right location and that the child’s been dropped off at daycare,” Diamond added.

That’s what happened to Wes and Dawn Peabody, a Phoenix-area couple who lost their 2-year-old daughter Maya after Wes forgot she was in the car.

“I didn’t know she was in the car until I saw her in the car…” Wes said. “And that was, just, I don’t have words for what that was like.”

It was a Saturday. Dawn usually drove Maya — but the routine changed, family was in town, and Wes forgot she was in the backseat.

“I didn’t remember that she had gone home with us until Dad asked where she was at,” Wes said.

“And then you go outside, and you see her in the car,” said CBS News transportation correspondent Kris Van Cleave.

“Yup, that was hard,” Wes said, as Dawn wiped away a tear.

Years later, that memory is still devastating. Now, the family is urging Congress to pass a bill requiring carmakers to install a backseat warning system.

Hyundai is rolling out one of those systems, but it’s an optional feature. The system includes a chime and dashboard message to check the backseat. If the driver locks the car and walks away, the horn goes off and the car sends a push alert to the owner’s phone.

Last month, automakers agreed to voluntarily make some form of backseat alert standard in cars by 2025. Republican Senator Roger Wicker is sponsoring a bill to require the alerts, although he also said he supports the automakers’ voluntary agreement.

“This is a quicker and better solution and lives are going to be saved because of it,” he said. 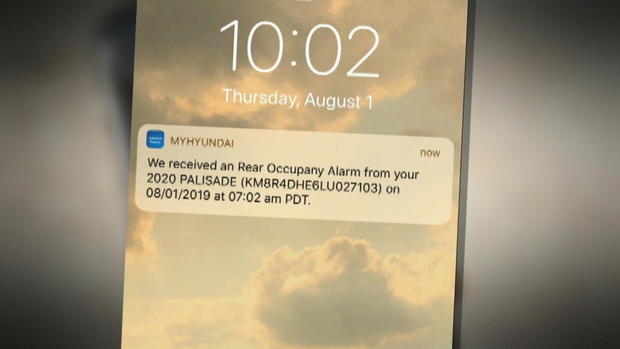 When asked if he believes that automakers will adhere to the voluntary deadline, Wicker said that he’s “very confident.” But safety advocates worry there’s no set standard and no binding requirement.

“We want to make sure this is an enforceable rule,” said former NHTSA administrator Joan Claybrook. “Something that they have to be sure is the complete system, both an alert and a notification.”

For Wes and Dawn, telling Maya’s story – a story of a silly toddler who had a habit of running up and hugging people – is a way to warn parents that their tragedy can happen to anyone.

Hyundai will make the dashboard warning and chime standard. The second layer of the horn and push alert will only be available in certain models.