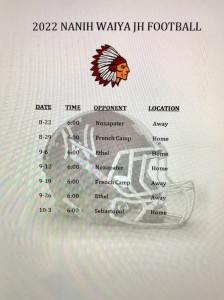 LOUISVILLE (Miss.)- Nanih Waiya football has a rich recent history. After taking a step back in 2021, the Warriors are eager to get things back to where they used to be.

While it was a disappointing campaingn, head coach James Courtney saw a few silver linings and the team’s objective will always stay the same.

The Warriors’ offensive line has shown more promise than any other positional group.

“They’re not gonna be the biggest kids but they get after it and have a good bond and relationship,” Courtney said. “They need to be smart kids to do what we do running gap scheme stuff and we will be strong up front we hope.”

Courtney’s son Tanner is a senior quarterback for the Warriors. He has enjoyed coaching him and says it likely has been a challenge for Tanner.

“I’m twice as hard on him as anybody else but it’s a great honor to coach your own son and watch him develop. He has been a good player for us.”

“He pushes me to be the best that I can and I like the motivation,” Tanner Courtney said.

Courtney is entering year 5 as Nanih Waiya’s head coach and the players over the years have benefited from his leadership.

“He’s a good and hard-nosed coach,” center Burton Rosamond said. “He loves me, all of us and the game of football.”

The main objective for the rest of the summer is to get the young guys prepared.

“We’re gonna have to play a bunch of young kids. We’ve got talented ninth-graders and they need to play. They need to be ready for a physical workload.”

The Warriors season gets rolling on August 25th at home against Noxapater.