The comedian is horrified to discover that a global chain of M&M’s World stores exists, making it even easier for us to buy candies you can buy anywhere.

Our Contributor Jim Gaffigan has soured on one candymaker’s marketing approach:

Recently I took my ungrateful children to an over-priced Broadway show that was not “Hamilton.” Any New Yorker will tell you there is “Hamilton,” and there are the Broadway shows you can actually get tickets to.

As we left the non-“Hamilton” show, I was congratulating myself on being a great New York City father who actually voluntarily went to Times Square, when I saw it. No, it wasn’t the mass of humanity wandering aimlessly among the glare of commercialism. It wasn’t the numerous freelance freakish mascots that look like nightmarish versions of Elmo and the Statue of Liberty. No, it was something far more disturbing. 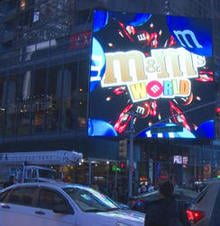 This wasn’t my first time encountering M&M’s World, but I had the same incredulous reaction. I mumbled to myself, “Why?”

Since the M&M’s inception at the end of who knows, is it possible that anyone has ever pondered, “When are they going to open an M&M store?” Has a single person ever looked at an M&M’s World and thought “Finally! A place for all my M&M needs! Sure, I have to pass dozens of stores and kiosks that sell M&Ms to get there, but it will be worth it to finally buy M&Ms in a totally pro-M&M environment.”

I’m not sure how many M&M’s they have to sell to justify the Times Square location. Luckily they don’t have to rely solely on M&M sales. They can also include the sale of Peanut M&M’s, and stuffed animal M&M’s, and, well, absolutely nothing else.

In January, I was slightly horrified to come across an M&M’s World in London’s West End. Somehow the London M&M’s World didn’t make me embarrassed to be American. It made me ashamed to be human.

The M&M’s World in London is massive. It has four levels, which I guess in a way makes sense: The first level and second levels, you can buy M&Ms; the third level so you can buy more M&Ms; and the fourth level so you can jump to your death because you wasted time in an M&M store when you were in London! 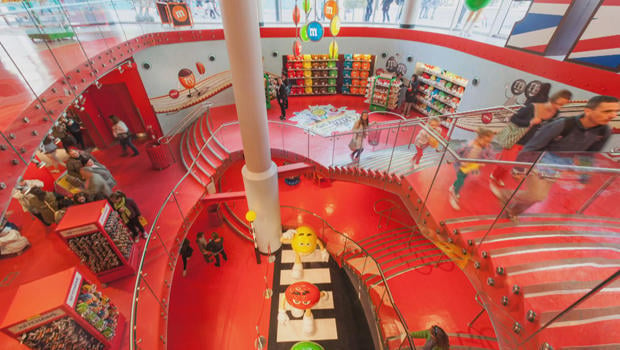 There are also M&M’s Worlds in Las Vegas, Orlando and Shanghai, because obviously there needed to be some form of entertainment in those otherwise bland destinations.

Hey, I don’t have any judgment. If you personally enjoy going to the M&M store, that’s fine. But obviously, you shouldn’t vote.