The homeowners reported hearing a noise on the back porch and went to investigate.

They found a wall of flames and were able to escape without injury.

The house was engulfed by the time District 3 firefighters got to the scene.

The Red Cross is assisting the homeowners.

A pet was lost in the fire.

Austin believes the fire could be electrical in nature but the investigation into a cause continues. 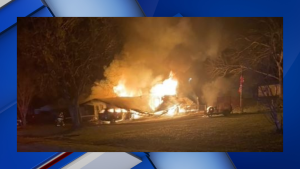