STARKVILLE, Miss. (WCBI) – The devastation left by the tornado outbreak in Kentucky has hit close to home for a Starkville woman.

Before moving to the Golden Triangle, Robin O’Nan was born and raised in Henderson, Kentucky, and spent several months living with her husband in Mayfield, one of the cities the tornadoes hit hardest.

“Unless we are personally connected to something like this, a devastation like this, we don’t feel the pain and the hurt that those people are going through,” she says.

O’Nan says it was Saturday morning when she learned about the destruction throughout her home state.

For Starkville’s Robin O’Nan, the #Mayfield 🌪 hit close to home. Her cousin is the city’s mayor Kathy Stewart O’Nan. Nephew Josh Jenkins is postmaster general. How she is helping her family+many more in the aftermath of the #tornadooutbreak tonight on @WCBINEWS #mayfieldstrong pic.twitter.com/L1Y4VIIPWG

“It’s hard to explain the feeling I had,” she says. “I was heartsick and I was just scared because we didn’t know if anyone had been hurt or what was going on.”

She says it is a different kind of pain when it’s someone you love involved in a national tragedy. O’Nan says she has several family members who were in the storms’ path in Mayfield, including Mayor Kathy Stewart O’Nan, her cousin.

“We’re desperate. There are no live electrical wires within the city’s zone,” the mayor said during her press conference Monday. “So that is our first priority, to get those basic needs to our people.”

“She has a great love for that city and they love her,” Robin says. “She’s a perfect fit for this. I know this is extremely hard for her.”

Once she knew her family was safe, Robin knew she had to help, even though she was more than 250 miles away. She reached out to her nephew and postmaster, Josh Jenkins about the best way to help a town with no power, running water, or natural gas.

“He said that the President had been in touch with him through Zoom and they are trying to set up a post office box for Mayfield so they can get their mail there,” Robin says.

Robin says her nephew told her that donations are what the town needs most right now.

Robin says she has contributed to the Mayfield Community Foundation Tornado Relief GoFundMe as well as to her other nephew Tim O’Nan, whose catering business in Bowling Green is donating meals to displaced families.

“He said it will be weeks before these people will have another way of being taken care of,” Robin says. “So he wants to do that as long as he can.”

And she wants as many people as possible across the Golden Triangle to join her.

“If all of us would look at ourselves for just a moment and think about something that we’ve gone through and think about what it felt like when one person, possibly just one person, reached out,” Robin says. “I think all of us can afford $10 or $5 to do that because it will go a long way for these families.”

Click here to donate to Mission Catering or scan their Venmo QR code below: 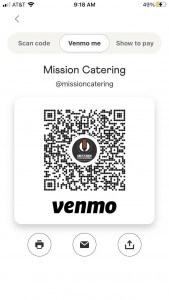 Round 2 of storms returns tonight, then we'll shift to a dry pattern