COLUMBUS, Mississippi (WCBI) – The weather stays generally dry through Thursday. Rain chances will pick up for Friday and the weekend.

WEDNESDAY: Like yesterday, most places will stay dry, warm, and humid with highs in the 90s and heat indices ranging from 98 to 103 degrees. While a spotty shower is possible, widespread rain is unlikely.

THURSDAY: Another rinse and repeat forecast of warm and mostly dry weather. Highs will reach the mid to upper 90s across the region with limited to no daytime rain. A few showers could move in around sunset in the northern part of the state.

FRIDAY/WEEKEND: A weakening/stalling front will eventually move toward the TN/MS state line by Friday afternoon, bringing increased rain and storm chances to much of the region. Occasional showers and storms will stay possible from Friday evening all the way through Sunday, but there will be dry time mixed in as well. Because of the increased cloud cover and rain chances, highs will be held slightly below average…in the upper 80s to near 90 degrees. 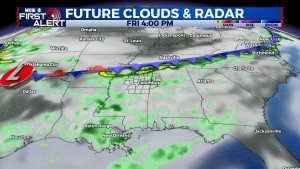 NEXT WEEK: Isolated to scattered storms could stick around into next week. Highs will hover in the upper 80s to near 90°.