A candidate running for Queens County district attorney is getting national attention for her progressive policies toward criminal justice reform, including her support of decriminalizing sex work.

“This is not only an economic issue, but a human rights issue,” Tiffany Cabán told CBSN’s “Red & Blue” Monday. “It’s really important to understand who is doing the work and why. In a lot of ways sex work is survival work.”

Cabán said she would not go after sex workers themselves, nor their customers. However, the first-time candidate noted her plan would include prosecuting anyone who contributes to non-consensual crimes, such as traffickers or sexual assaulters.

The New York Post reported last year that the New York Police Department rescued “one person a week from sex slavery,” as well as worked on 265 sex trafficking cases; double the amount from two years prior. The National Human Trafficking Hotline has received 6,453 calls that reference incidents in New York state since 2007.

“Through decriminalization you make it safe for survivors and victims to go to law enforcement and be the witnesses needed to hold these traffickers, who are doing harm, accountable,” she added.

Cabán is running against five other candidates in the Democratic primary being held Tuesday. The election might be local, but lawmakers in Washington are weighing in.

Congresswoman Alexandria Ocasio-Cortez endorsed Cabán in May. Over the weekend, she rallied for her in Jackson Heights, an area of Queens in Ocasio-Cortez’s congressional district. Many consider the district attorney race to also be a test of Ocasio-Cortez’s support in the area. 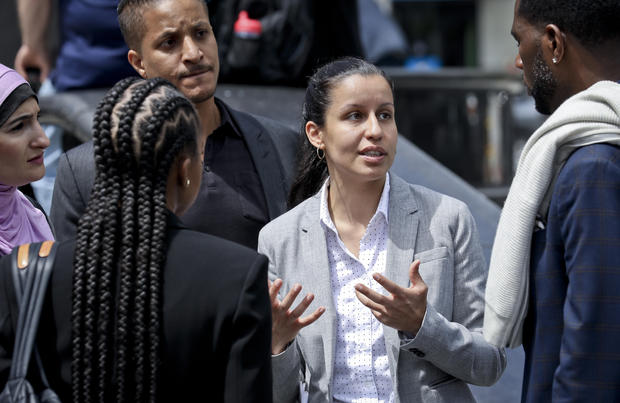 The public defender has also received endorsements from senators, and 2020 candidates, Elizabeth Warren and Bernie Sanders. Last week Sanders credited Cabán with “taking on the entire political establishment” with her progressive approach.

A leading competitor of Cabán’s is Queens Borough President Melinda Katz. She made her mark on the race for courting the establishment wing of the party, and has criticized Cabán for her lack of experience. Katz is backed by the Queens County Democrats, Gov. Andrew Cuomo, as well as former Congressman Joe Crowley, who lost his seat due to Ocasio-Cortez’s upset victory.

Cabán said she has not worked with any of her own endorsers on a campaign platform. Rather, she values the support because it speaks to national “values aligning” and an acknowledgement of her grassroots movement garnering significant strength.

“Our policies are the product of sitting down with folks who have been directly impacted by our justice system and centering their experiences,” she added.

Watch more of Tiffany Cabán’s interview on “Red & Blue” in the video player at the top of the page.