November begins with above average temperatures

TUESDAY: Expect more sunshine compared to Monday, but clouds will be scattered throughout the region. Highs will top out in the middle 70s.

TUESDAY NIGHT: Clouds increase further and will delay cooling somewhat, but lows should still drop into the lower & middle 50s. An isolated shower or sprinkle is possible, but with limited moisture, major rain is not anticipated.

REST OF WEEK: Decreasing clouds and warmer afternoons will be the story. Expect lots of sunshine Wed-Fri with highs reaching 80 degrees by the end of the week.

WEEKEND: A dynamic storm system will push a weakening front toward the Mid-South Saturday afternoon. While most of the wind energy looks to deflect north, at least scattered showers and perhaps a few storms could develop Saturday evening across north MS. We still don’t expect severe weather, but we’ll monitor in case anything changes. This front is expected to stall, so clouds and a few showers could carry over into Sunday. 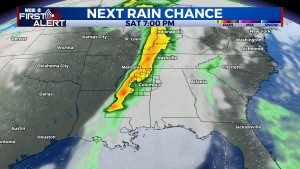