STEENS TORNADO – this tornado began just east of US 45, approximately 4 miles south of the Air Force Base. It quickly moved east and strengthened as it crossed Highway 12 near the Woodlawn community. This tornado was rated an EF-2 with maximum winds near 130 mph. The tornado lifted just before reaching the state line.

CRAWFORD TORNADO – a short-lived tornado began a couple miles northwest of Crawford and crossed US 45 before lifting shortly thereafter. The path length was just over two miles, and the tornado was rated an EF-1 w/max winds of 90 mph. 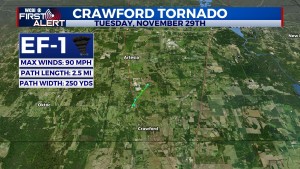 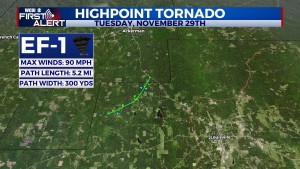 NORTHERN CHOCTAW CO TORNADO – this almost-7 mile track began near Highway 9 in northern Choctaw Co. and dissipated as it neared Highway 15. It did knock some trees down as it crossed the Natchez Trace Parkway and rolled an RV on its side. 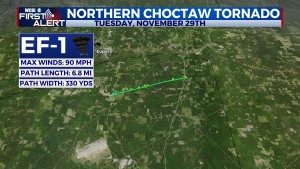