Salem, Oregon — Republican state senators in Oregon continued to engage in a high-stakes game of brinksmanship over the weekend with Democratic lawmakers, remaining away from the capitol and threatening a lawsuit over a $500-per-day fine from the Senate president. At the center of the debate is a climate change bill.

Eleven Republican senators fled the Legislature — and in some cases, the state — to thwart the passage of a cap-and-trade proposal that would dramatically lower greenhouse gas emissions by 2050. The minority GOP caucus wants the plan to be sent to voters instead of being instituted by lawmakers — but negotiations with Democrats collapsed, leading to a headline-grabbing walkout.

CBS 6 in Oregon reported a Sunday morning Senate session promptly adjourned because only 18 members showed up, as 11 Republican senators are still not participating. The Oregon State Senate is made up of 30 senators: 18 Democrats and 11 Republicans. Republican Jackie Winters died last month and has not yet been replaced.

Because the Republican walkout has prevented the 20 senator quorum in the Senate, legislation cannot be passed in a legislative session scheduled by law to end on June 30.

In a dramatic move on Thursday, Governor Kate Brown authorized the state police to round up and bring back the missing state senators. According to CBS 6, Brown said she will call a special session if Republicans “run out the clock.”

Carol Currie, a spokeswoman for Senate President Peter Courtney, confirmed that each missing senator was hit with a $500 fine Friday morning, which will be renewed each day they continue to delay a vote. She said in an email that “they will receive a bill for the amount owed.” 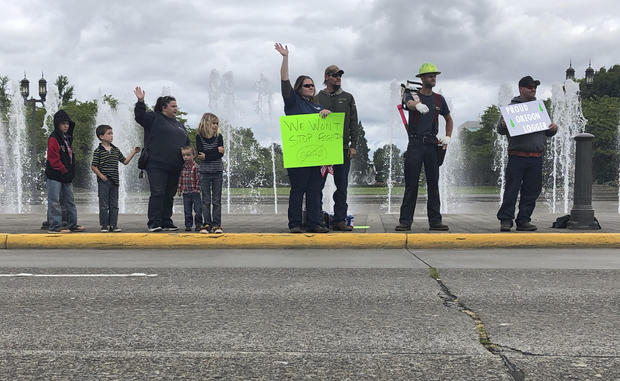 Loggers protest outside the Oregon State House in Salem, Oregon, on June 20, 2019, the day the Senate is scheduled to take up a bill that would create the nation’s second cap-and-trade program to curb carbon emissions.  Gillian Flaccus / AP

Republicans immediately pushed back. “We will file legal action,” said Sen. Tim Knopp, a Republican from Bend who has said he has been in three states in the past three days. “If they were trying to bring us back, threatening to arrest us and impose fines isn’t going to work.”

Senate Majority Leader Ginny Burdick, a Democrat, said Republicans have no legal recourse as the fine is explicitly written in statute. A GoFundMe to cover the rogue lawmakers’ expenses and fines raised nearly $40,000 between Thursday and Sunday. State ethics laws prohibit officials from receiving gifts exceeding $50, so it’s unclear whether senators could access the money.

State Police can force any senators they track down in Oregon into a patrol car to return them to the Capitol, although the agency said in a statement that it would use “polite communication” and patience to bring the rogue lawmakers back. The state police don’t have jurisdiction outside Oregon. But the Oregon State Police confirmed Thursday evening it was working with out of state agencies to track down the Republicans.

Under the proposed cap-and-trade bill, Oregon would put an overall limit on greenhouse gas emissions and auction off pollution “allowances” for each ton of carbon industries plan to emit. The legislation would lower that cap over time to encourage businesses to move away from fossil fuels: The state would reduce emissions to 45 percent below 1990 levels by 2035 and 80 percent below 1990 levels by 2050.

Those opposed to the cap-and-trade plan say it would exacerbate a growing divide between the liberal, urban parts of the state and the rural areas. The plan would increase the cost of fuel, damaging small business, truckers and the logging industry, they say. 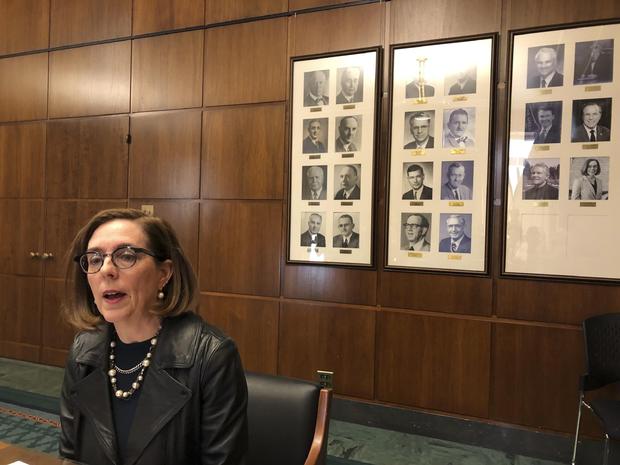 Feb. 7, 2019 Oregon Gov. Kate Brown speaks to reporters in front of pictures of previous state governors in Salem, Ore. Gov. Brown deployed the state police Thursday, June 20, 2019, to try to round up Republican lawmakers who fled the Capitol in an attempt to block a vote on a landmark climate plan. . Andrew Selsky / AP

Democrats say the measure is an efficient way to lower emissions while investing in low-income and rural communities’ ability to adapt to climate change. It has the support of environmental groups, farmworkers and some trade unions.

The walkout also puts other major Democratic priorities on hold, including affordable housing, tobacco taxes and paid family leave. Legislation addressing these topics sailed through the House Thursday, but their fate remains uncertain with the Senate shutdown.

This is the second time in this legislative session that minority GOP lawmakers have used a walkout as a way to slow the process. Democrats have a rare supermajority in the House and Senate, meaning Republicans don’t have many ways to influence the debate.