,
Protesters trap legislators in community center as Puerto Rico braces for massive protestUp to a million protesters are expected in the streets of Puerto Rico Monday to protest Gov. Ricardo Rosselló, who refuses to step down over a leaked online chat where he made homophobic and sexist remarks as well as federal corruption charges leveled against his administration. Rosselló announced Sunday night he will not seek reelection, but stopped short of resigning.

A political crisis has swept the Caribbean island — home to approximately 3.2 million U.S. citizens — since a non-profit journalism group published a trove of messages in which Rosselló and his top lieutenants mocked political opponents, talked about retaliating against journalists and made sexist and homophobic remarks.

A recent report also alleges a multi-billion dollar corruption network is behind the group chat, where public funds were used to influence and benefit private clients and the Puerto Rican government.

The scandal prompted the resignation of several officials in the messaging group, including his secretary of state and chief financial officer, and the governor is trying to quell the fallout and save his political career.

After Governor Rossello’s announcement that he will not step down, protesters blocked the only entrance to a government building in Guaynabo where the governor had met with mayors from his party. The governor was able to get out but some lawmakers were trapped. The police moved in after a couple of hours using smoke bombs and pepper spray to disperse the crowd.

Protesters in San Juan are saying Monday’s demonstration will be the biggest yet since this scandal broke. Hundreds of thousands of people are expected to shut down the main highway that links the capital with the rest of the island.

BREAKING: A major expressway in San Juan Puerto Rico (Highway 18)is being blocked by protesters calling for the Governor to resign. Listen to them, that’s all they’ve been asking of the Governor. https://t.co/qr7ie1YPzW

Puerto Rico’s beleaguered Gov. Ricardo Rosselló announced on Sunday he will not seek reelection next year and will relinquish his role as the head of one of the main political parties on the island.

Thousands of Puerto Ricans are expected to block the main artery into the capital of San Juan on Monday. Former New York City Council Speaker Melissa Mark-Viverito, one of Rosselló’s targets, told CBS News: “The only choice he has is to resign.” 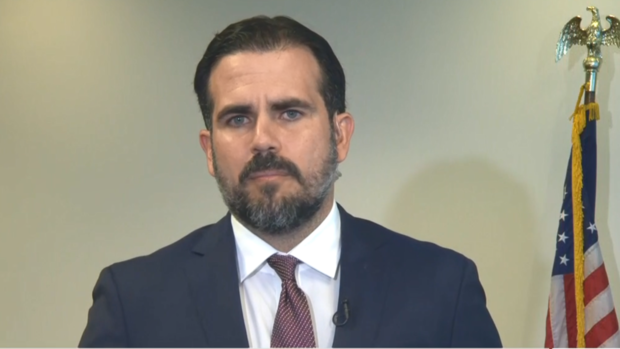 “It was shameful”: Puerto Rico’s governor responds to scandal

When asked by Begnaud if the contents of the leaked messages was illegal, Rosselló said in response that it it was “improper. I recognize it was improper, it was shameful. I’m going to everything I can do in my power to have conversations with groups I have hurt, not only personally but on a group basis, and start a healing process with it.”

Governor Rosselló is embroiled in scandal

Midway through July, Puerto Rico’s Center for Investigative Journalism published excerpts of a private chat involving the Governor of Puerto Rico. The leaked chat room conversations among Rosselló and 11 others are laced with profane, homophobic and sexist comments, and in one case even a death threat against San Juan Mayor Carmen Yulín Cruz.

The governor’s chief financial officer, Christian Sobrino, wrote “I’m dying to shoot her up.” Rosselló replied “You’d be doing me a big favor.”

At another point, he called former New York City Council speaker Melissa Mark-Viverito the Spanish word for “whore” and in English told a federal control board overseeing the island’s finance to “go f— yourself” that were followed with emojis of a raised middle finger.

Residents on the islands were outraged, and protests have continued over many days. The island has struggled to recover from Hurricane Maria in 2017, and Rosselló’s administration has been plagued by scandals involving funding. 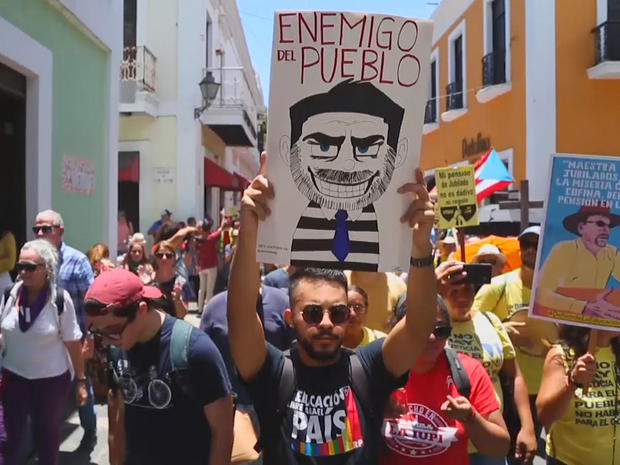 On Sunday protesters gathered outside the residence of Governor Ricardo Rosselló demanding he step down. CBS News