Alisha Fern and Tyler Adams are about to throw a surprise party, and the tension is palpable. They feel excited, and a little nervous. If they seem a little extra nervous, it’s understandable, because this isn’t just any surprise party; it’s a surprise wedding, which comes with its own special set of stresses.

“I don’t think it will quite feel like it’s actually happening until I put the dress on,” said Fern.

You might be asking yourself why exactly would someone throw a surprise wedding in the first place? That’s what correspondent Luke Burbank was wondering, when he first met Alisha and Tyler back in April, in Chardon, Ohio, when they were still in the planning phase.

Alisha Fern and Tyler Adams figure out how to keep the big reveal a secret, with help from their wedding planner, Diana Warner. CBS News

Jove Meyer is a wedding planner and wedding podcaster in New York. He says the type of couple that would have a surprise wedding is a younger, more modern couple.

“A surprise wedding is essentially when a couple decides that they want to forego traditional planning and invite their guests to a party that isn’t listed as a wedding,” Meyer said. “So, they invite them to a birthday party [or] an engagement party, and then guests show up and indeed it is a wedding.”

And while Mayer wouldn’t say that surprise weddings are exactly sweeping the nation, he would say the traditional wedding is moving into that “something old” category. “Gone are the days of picking chair cover A and B, picking fish or chicken and a white linen,” he said. “I think couples are looking to up their game in terms of how they customize and personalize their celebration.”

Sarah McManigal and Daniele Kimes told their friends in Nashville they were having a going-away party, since the couple was moving to Austin.

“The night we got engaged on the couch, I googled ‘surprise weddings’ and one popped up,” McManigal said. “The minute it came up, it was like, Oh, this is us!“

Kimes added, “I like a party, and she loves presents. So, that’s a win-win all the way around. Although with the surprise wedding, she did get a little shafted on the presents!” 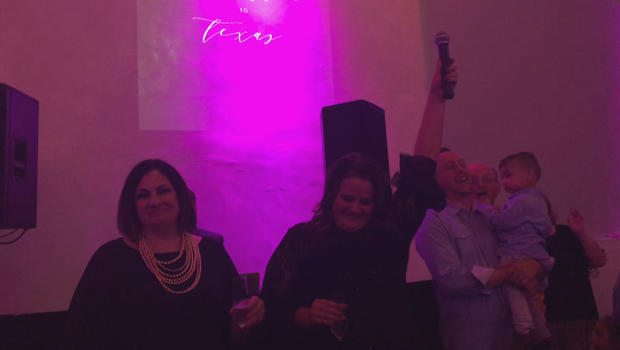 Daniele Kimes and Sarah McManigal announce to the crowd they are getting married, right now! CBS News

“It was powerful. I mean, you kind of tear up. It’s emotional,” Kimes said.

That’s exactly the kind of response Tyler Adams and Alisha Fern were hoping for back in Ohio for their big reveal.

On the Big Day, guests began arriving for what they thought was an engagement party. Also attending was Burbank, whose job was not to ruin the surprise.

After taking their wedding photos, Alisha and Tyler changed into less suspicious outfits. And then, at 4:30 p.m., it was time. They invited their guests into a reception room, where they found a sign: “Surprise – Welcome to our wedding.” 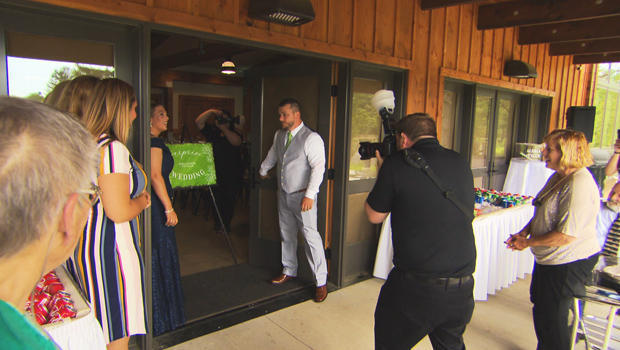 Welcome to our wedding! CBS News

The crowd seemed stunned, and maybe a little confused, but mostly happy for the couple. “Wow, you sneaky dog!” said one guest.

Of course, there’s something else you have to think about when you throw a surprise wedding: Whether or not your family can handle the shock, like, physically. “This is a pretty big, blood pressure-raising kind of thing,” said Maryanne Adams, mother of the groom. “I’m still kind of palpitating a little!”

With everyone medically stable, it was time for the ceremony, which mercifully was surprise-free. 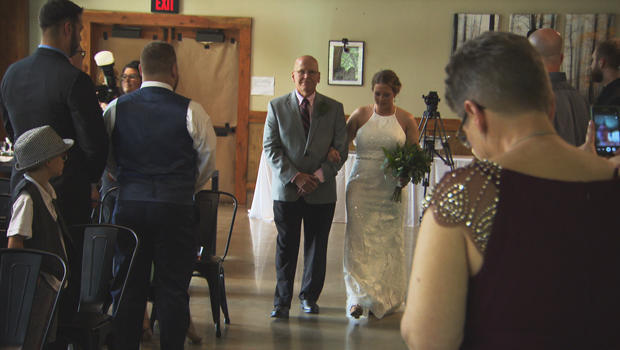 Sir, care to guess what you will be doing this afternoon? CBS News

Then dinner and dancing. And then, like most weddings, before the bride and groom knew it, it was over.

Burbank asked, “Do you feel like this was a good call to do the surprise element?”

And it was time for their new life together to begin. 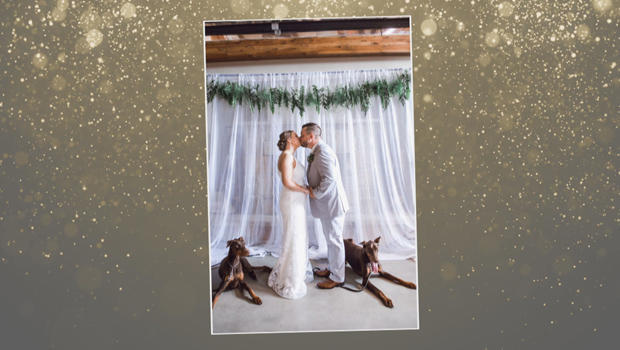