Spy museum lifts veil of those “working in the shadows”

In 1777, Gen. George Washington established the country’s first spy network to take on the British during the Revolutionary War. That is where America’s spy story begins, but the $162 million International Spy Museum, in Washington, D.C., is re-imagining what spycraft looks like today.

Packed with nearly 10,000 artifacts and interactive exhibits, the 140,000-square-foot museum, which reopened to the public this weekend in a completely new space, is a completely new experience after a nearly three-year upgrade. Visitors (who are each assigned a cover identity) can explore exhibits that pull back the veil on the lives of international spies – like the so-called “Mata Hari,” a Dutch spy and exotic dancer.

The history and tools of spycraft are drawn out from the shadows at the International Spy Museum in Washington, D.C., with exhibits that pull back the veil on the lives of international spies. CBS News

“She didn’t spy for very long,” said lead curator Alexis Albion. “Only really a few months, and of course, she ended her life really tragically; she was executed during World War I for espionage.”

You’ll also find a high-altitude flight suit, on loan from the CIA. “The idea was to keep the pilot alive in these spy planes so that they could capture the imagery from the skies,” Albion told correspondent Errol Barnett.

And, an ice pick used to assassinate a Soviet exile. “You can still see actually the rust mark right on the blade there with the bloody fingerprint of the assassin,” said Albion.

Many of the artifacts in the new museum – about 7,000 of them – originated in the personal collection of intelligence historian H. Keith Melton, who spent 45 years tracking down what he calls history’s obscure artifacts. He now has 7,000 of them.

“There is a hidden world behind every newspaper headline, every television story on international relations,” Melton said. “The true stories are even more fantastic than the fiction.”

Like that of the so-called “Russian 10,” a group of Russian spies living as suburban couples – the inspiration for the TV program “The Americans,” for which Melton served as a consultant.

Computer images of flowers, which the Russians embedded with secret messages, are on display next to the handcuffs used to arrest Anna Chapman and nine others in 2010. It was, Melton said, the FBI’s greatest counterintelligence success. 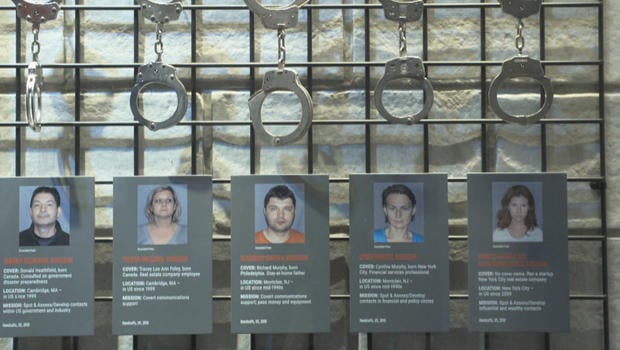 Anna Chapman (right) was one of ten deep-cover Russians arrested in the U.S. on espionage charges in 2010. CBS News

Colonel Chris Costa, a former military intelligence officer, is the museum’s executive director. He explained why American intelligence failures, like those which preceded 9/11 and the Iraq Wars, are also on display: “We don’t always get it right. And learning comes from success as well as failures.”

The key question being, what? “Why was there an analytical failure? That’s why we spy,” he replied.

One exhibit even comes with a warning: the exhibit on “enhanced interrogation,” a practice now banned by the U.S. government. “We show the evolution from current day backwards throughout history,” Costa said.

Colonel Costa emphasized that spycraft is not for everyone: “It’s a quiet profession. Our work is not lauded. We’re happy working in the shadows. In the case of the Spy Museum, we have a gift, and that is the gift to educate the public on what this work is all about.”

Interestingly enough, the point of everything on display at the museum is not to convince people to enter the world of surveillance and espionage. In fact, lead curator Alexis Albion said, if after seeing everything here – the risks and the failures – people realize they do not want to be spies, she would consider that a success, because living a life of deception is not for everyone.

The International Spy Museum is located at L’Enfant Plaza, just south of the Smithsonian Castle on the National Mall in Southwest Washington, D.C.