TUESDAY: Summer officially begins today, and the weather will tag along as well. Expect plenty of sun with highs in the mid 90s…upper 90s for some. Heat indices will once again return to the 100s, nearing 105 degrees in some spots.

WEDNESDAY: The hottest day of the work week. Ahead of a weak front, temperatures are likely to soar into the upper 90s, nearing 100 degrees in a few areas. 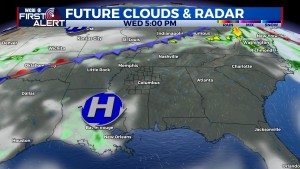 REST OF WEEK: Even though a weak front may sneak by, temperatures only fall a couple degrees in the afternoon. Highs Thursday and Friday will hold in the middle 90s with morning lows slipping back into the upper 60s. Rain chances look limited on Thursday, but perhaps a shower or two can be squeezed out.

WEEKEND: Saturday still has the best potential to reach 100 degrees for most of north MS ahead of Sunday’s front. However, inconsistent model guidance precludes the official forecast from calling for 100° at the moment. Keep in mind, major heat is still expected! Sunday does bring a rain chance as a stronger front arrives, and hopefully at least scattered rain and storms will knock temperatures way down. This could continue into Monday of next week.