Typical August heat for the week ahead 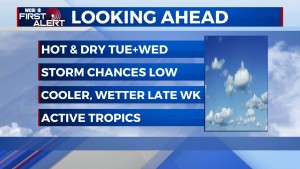 SUMMARY: The heat isn’t looking to go anywhere anytime soon. Highs will stay in the mid to even upper 90s for Tuesday and Wednesday, with slightly cooler weather for the latter part of the week and the upcoming weekend. Rain chances will be very low for Tuesday and Wednesday, with isolated storms Thursday and Friday, and scattered storms for the weekend. Highs drop to the upper 80s to low 90s for the weekend and early next week.

MONDAY NIGHT: Drier air in place will keep us mostly cloud free tonight. Winds will be calm, with lows in the low 70s.

TUESDAY: A hot and sunny day in store, with highs topping out in the mid to upper 90s. It will feel well into the 100s in the afternoon, so take lots of breaks and stay hydrated if working outside!

TUESDAY NIGHT: Clear skies once again, with winds calming. Lows in the low to mid 70s.

WEDNESDAY: Another hot day, with partly cloudy skies in the afternoon. A stray shower or storm is not out of the question in the evening, especially in southern part of the area with most of us staying dry. Highs top out in the mid 90s. 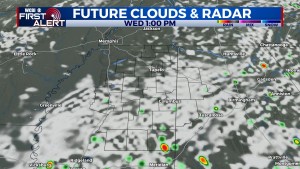 THURSDAY TO MONDAY: Rain chances increase a bit for Thursday, with isolated afternoon storms possible and highs cooling slightly to the low 90s. Friday looks very similar, low 90s, partly cloudy and isolated PM storms. Most of us likely will stay dry. The weekend is looking wetter, with scattered storms possible Saturday and Sunday, and highs in the upper 80s to low 90s. Scattered shower and storm chances look to stick around as we begin next work week. Lows remain near the 70 degree mark each night.

TROPICS: The tropics look to stay very active, with 3 “areas of interest” in the Atlantic that could develop into a named storm. No threats on our horizon, but as we’re in the peak of the season, we always have to be vigilant! 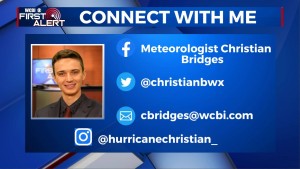