COLUMBUS, Mississippi (WCBI) – Temperatures will continue climbing toward 90 degrees by Wednesday. A few storms still appear likely over the weekend.

TUESDAY: A good amount of sunshine will continue today as the influence of mid-Atlantic high pressure remains over the region. Highs top out in the middle 80s, slightly warmer than yesterday. 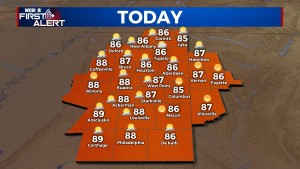 WEDNESDAY: This still looks like the hottest day of the next seven as temperatures inch closer to 90 degrees. Plenty of sun is in store, though there is a chance of a brief late-day shower. 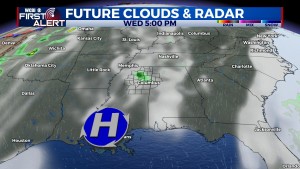 THURSDAY: A disturbance moving west from the Atlantic could bring in enough moisture to squeeze out isolated showers, though rain coverage should remain isolated. Highs will still reach well into the 80s despite added cloud cover.

FRIDAY: The aforementioned disturbance should help heat levels back off somewhat into the lower or middle 80s.