Winston County Sheriff retires his badge after more than 10 years

WINSTON, Miss. (WCBI) – After more than 10 years on the job, one area Sheriff is ready to turn in his badge and enjoy more family time.

Winston County Sherriff Jason Pugh has announced he will not run for another term. While he is preparing for retirement, other candidates are preparing to campaign

I spoke to Sheriff Pugh about his time in law enforcement and the moments he will remember.

Winston County Sherriff Jason Pugh is stepping down at the end of this term.

And while he is gearing up for retirement, Sheriff Pugh is also reflecting on his time in office. 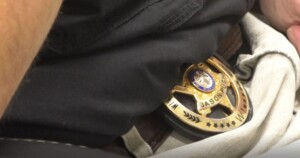 Pugh says most people are not aware of all the tasks the sheriff’s office handles.

“The second most trying time that we’ve had while I was Sherriff was the Covid Pandemic. That was a lot of uncharted territory. Nothing prepared us for that, not knowing how the disease would affect deputies in the field,” Sheriff Pugh said,” Pugh said.

With a population of nearly 18,000 citizens and fewer than 10 deputies on his staff, Sheriff Pugh says he and his deputies have had to endure long, hard hours. And he wants his successor to be prepared.

“The next Sheriff has his work cut out for him, and I encourage him to leave it better than he found it,” Pugh said.

Sheriff Pugh said that even through rough times he has had a tremendous support system.

“The most humble thing that I guess for me is to realize how much your family is there for you. They handle business when daddy is at work, and to watch them do their job to be supportive of me when we are out nights and weekends on end when all the problems in the world are happening, that kind of support is the most humbling thing I can ask for,” Pugh said.

Sheriff Pugh has one more year to serve and is not sure what he will do next as a career but is planning to catch up on some tv.