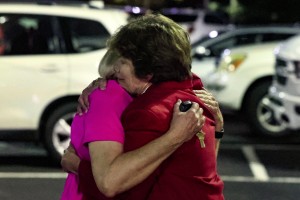 CORRECTS NAME OF CHURCH Church members console each other after a shooting at the Saint Stephen’s Episcopal Church on Thursday, June 16, 2022 in Vestavia, Ala. (AP Photo/Butch Dill)

VESTAVIA HILLS, Ala. (AP) — Police say a lone suspect fired on a small group meeting at a church near one of Alabama’s major cities, fatally wounding two people and injuring a third victim.

Police say the suspect is in custody after the shooting attack Thursday evening at Saint Stephen’s Episcopal Church in the Birmingham suburb of Vestavia Hills. Police Capt. Shane Ware said at a briefing that he confirmed a suspect was being held but declined to identify that person.

He said the armed person entered the church meeting and began shooting Thursday evening. Vestavia Hills is a suburb of Birmingham, one of Alabama’s two most populated cities.