Another cold night ahead, but nice start to the workweek

COLUMBUS, Mississippi (WCBI) – SUMMARY: Another bitterly cold night is in store but we’ll warm back up on Monday, making for a comfortable start to the workweek.

TONIGHT: It’s going to be plain COLD! Bundle up if you’re heading out! A freeze warning is in effect for the Golden Triangle and locations south. Low of 31 degrees with a light southeasterly wind. 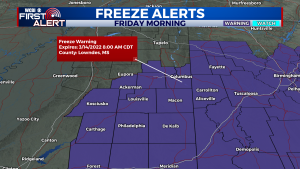 TOMORROW: Expect mostly sunny skies and a high of 64 degrees. It’ll be breezy at times, with a SE wind of 5-15 mph (gusts higher).

TOMORROW NIGHT: Cloud cover will increase and showers are possible after midnight. Low of 49 degrees. Chance of rain: 40%.

TUESDAY: It will be an overcast and gloomy day with off-and-on scattered showers across most of the region. Some may even hear a rumble of thunder or two. High of 62 degrees. Chance of rain: 80%. 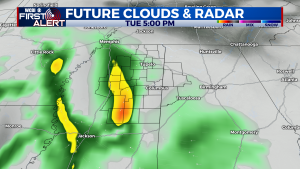 EXTENDED FORECAST: After the rain moves out early Wednesday morning, we’ll have a short break from precipitation. Expect partly cloudy skies on Wednesday with a high in the mid-upper 60s, and mostly sunny skies on Thursday with a high in the low 70s. Our next chance for rain comes on Friday as another front moves through the region. Showers and/or thunderstorms seem possible. For now, we’ll keep rain chances at 30%. Have a great week! 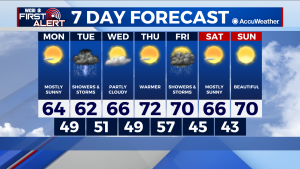