TUPELO, Miss. (WCBI) – A Tupelo man is arrested after a short pursuit with police. 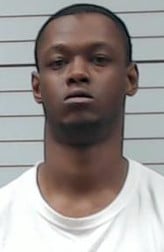 Investigators say, while conducting a safety checkpoint on Monument and Bryan Drives, Smith refused to pull over.

Then a short pursuit began.

Officers say Smith was driving a grey Kia optima, when he ran off the road on Torrey Street.

Smith fled on foot, but was captured moments later.

The suspect was driving alone in the car. No injuries were reported.